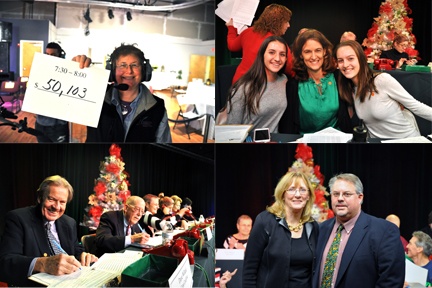 There’s a moment every year when Cape Cod Broadcasting’s Matt Pitta truly gets into the spirit of the holiday season. It always happens at the same event – HAC’s annual Shelter Cape Cod Telethon – which Pitta co-hosts with WCAI’s Mindy Todd.

“The vibe and the atmosphere in the studio all night is kind of electrifying,” he said. “That’s when I get into the holiday spirit – when I see people giving back to the community. That is the true spirit of the holidays right there.”

This year’s telethon, now in its 14th year, will take place on Thursday, December 14, from 5-9 pm. The show is broadcast live from Cape Cod Community Media Center and airs on local cable access channels throughout the Cape.

The telethon will feature HAC staff, elected officials, and community leaders working to help those most in need on Cape Cod and the Islands, placing a spotlight on the region’s housing and homelessness issues.

Funds raised from the telethon go to support HAC’s programs, including homeless outreach as well as its four family shelters – Angel House in Hyannis, the Village at Cataumet in Bourne, Carriage House in North Falmouth, and Scattered Sites in Hyannis.

“I do think every year that it gives a special meaning to Christmas,” said HAC volunteer Wayne Bergeron of Dennis who assists with the event.

Pitta said the telethon serves as an opportunity for people “to make a difference in the community. And that’s really what the holidays are all about.”