Virtual Summit Highlights Impacts of Pandemic on the Cape

Even before the pandemic hit, the housing crisis on Cape Cod was at a tipping point.

One indication could be seen in this statistic: pre-COVID, 45 percent of renters in our region were either extremely cost burdened or burdened. “What that means is they don’t have any savings. They don’t have the wherewithal to ride this storm out and wait for better days to come,” Housing Assistance CEO Alisa Magnotta said during a virtual discussion dubbed, “Cape Cod in the Time of COVID-19,” that looked at the impact the past six months has had on the region’s economy, real estate, employment, and housing.

Magnotta was joined by Cape Cod Chamber of Commerce CEO Wendy Northcross, Cape Cod & Islands Association of REALTORS® CEO Ryan Castle, and MassHire Cape & Islands Workforce Board Executive Director Kara Galvin in talking about the current state of the Cape and forecasting what it will look like in the future. 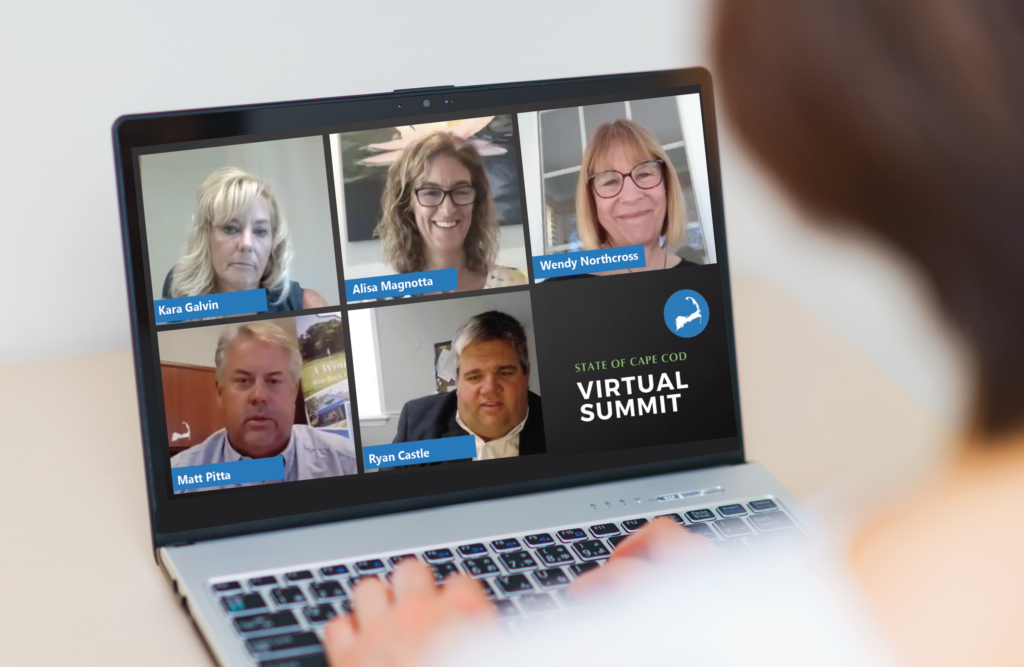 Check out the recorded video here

The virtual discussion, which aired on Facebook and YouTube live as well as on cable access channels, was moderated by Matt Pitta, Director of Communications for the Davenport Companies.

One of the few sectors not to be negatively impacted by the pandemic in recent months has been real estate where “it is unprecedented what we’re seeing on Cape Cod,” Castle said.  “In July alone, we did $140 million of volume. It’s more than any month than we’ve ever done before.”

Despite this good news, Castle warned, there is a greater demand than supply, caused by off-Cape buyers with better paying jobs seeking to enter the market. All of this is pushing median home prices up, outside the limits of what year-round Cape Codders can afford.

Magnotta said, “the pandemic has exacerbated the problem we’ve had — we’ve had an inventory gap. We’ve had an affordability gap for years.”

Since mid-March, Housing Assistance has witnessed this rear its head in the 400 percent increase in calls for financial assistance. “Basically, a bad situation got worse,” Magnotta said. “It’s as bad as everyone is hearing. We’re getting calls from people who can’t pay the rent and have no ability to pay going forward.”

That is having a trickle-down effect on landlords. Magnotta noted a recent survey Housing Assistance conducted revealed that roughly 40 percent of landlords say their tenant was behind on rent and 75 percent wanted to work out a payment plan for them.

“That’s a potential for a two-headed crisis,” Pitta said. “If the tenant can’t pay and the landlord is going to lose their home, now you have two people possibly in serious trouble.”

At present Housing Assistance has amassed over $1.5 million for these programs and given out $500,000 to assist those in need at this time, Magnotta said.

Both she and Castle said Governor Charlie Baker’s Housing Choice legislation is another opportunity to address long-term needs by increasing the production and inventory of affordable housing in our region and throughout the Commonwealth.

“This crisis has really punctuated and highlighted the realization that we need to invest in housing,” Magnotta said. “This is an all hands on deck, community problem. We need people coming to the table with resources and ideas to fill in gaps in the market place right now.”