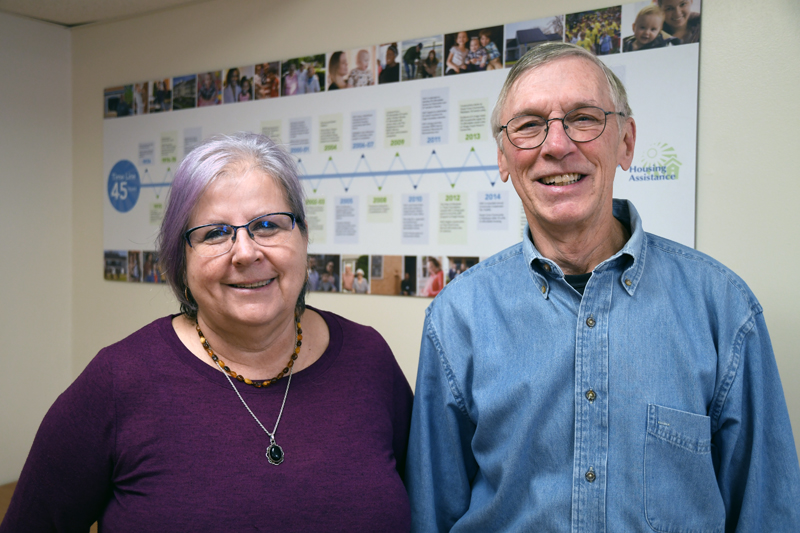 Ruth Bechtold, who spent nearly three decades at Housing Assistance, is retiring today. Since October, Ruth has been training David Fuller who is the agency’s new Energy Department manager.

Ruth was able to turn that role into a temporary position which eventually became a permanent one in Housing Assistance’s Leased Housing Department as a Section 8 Housing Voucher Representative.

Today, Ruth will walk out Housing Assistance’s doors one last time, saying farewell to a career that allowed her to give back to residents seeking access to the housing they needed to stabilize their lives. During her time here, she has served as the Family Self-Sufficiency (FSS) Coordinator, assisted with housing lotteries conducted by the agency’s Cape Community Real Estate Department, and most recently, managed the Energy Department.

When asked what she enjoyed most about her time here, Ruth said, it was the ability to have an impact on people. “I just loved the mission to keep people housed,” she said. “And to teach the community that homeless people are decent human beings that need to be respected like everybody else.”

In the Energy Department, Ruth oversaw a program that received funding from the federal and state government as well as local utilities to conduct energy audits and weatherization measures for low-income households on Cape Cod and the Islands as well as Wareham.

“Probably the best part of this job is helping folks with limited income save money on their electric bills and helping them be more comfortable and safer in their homes,” she said.

It was work made easier by “a really good team, with our auditors on the road and our in-house admin staff,” she said. “Everybody here is 150 percent dedicated to their job and our mission to keep people safe and warm in their homes.”

Since October, Ruth has been training her replacement David Fuller, who is assuming the reins of the Energy Department.

As Ruth steps into retirement, she plans on visiting family in her hometown of Bern, Switzerland later this year. She will also devote more time to reading, arts and crafts, playing music, and her involvement in The Barony of Smoking Rocks, the local chapter of the Society of Creative Anachronism which recreates the best of the medieval times, atmosphere, and culture.

“I’ll miss my colleagues and the friends I’ve made here,” she said. “And I’ll miss the work, but I’m looking forward to this new chapter in my life.”