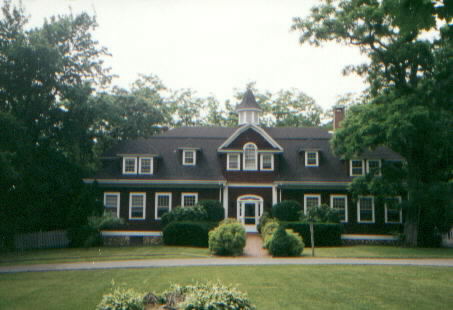 When it comes to history, there may be no HAC property more significant than Carriage House in North Falmouth. The building, which was once a 1960s nightclub called the Banjo Room, was originally built in 1904 as a barn by summer resident William C. Spencer.

Aside from serving as a carriage house, it has also operated as a garden store and a single-family residence for a family with six children. When first built, Carriage House contained staff quarters, a stall for horses, a hay loft, a trunk room and space for carriages to be parked and washed. The ramp that carriages used to enter the facility still exists.

Today, Carriage House serves as one of four homeless shelters owned by HAC. Because of its historical significance, the shelter is receiving a makeover courtesy of the Town of Falmouth’s Community Preservation Act (CPA) funds.

In November, Falmouth’s Town Meeting members unanimously approved an article to spend $85,000 that will fund the replacement of 48 windows at Carriage House. It’s a project that HAC had on its to-do list for several years.

Thanks to the CPA, a state statute that provides funding for projects in one of four categories – historic preservation, open space, affordable housing and recreation – the work is coming to fruition, helping to preserve the shelter’s history.

“It’s a beautiful structure and getting much deserved attention,” said Carriage House’s facility director Katie Geissler. “Carriage House is a very old building on a property with historical significance, dating back to the late 1700s.”

Spencer purchased the property from the Nyes, erecting a carriage house behind the home 112 years ago. Historically, Carriage House is known as the William C. Spencer Horse Barn.

In the 1950s, two sisters from Brookline ran a restaurant named Carriage House out of the Nye homestead. That home was demolished in 1965, one year after John and Raymond Deely took ownership of the property, leaving only the barn.

The land changed hands again in June 1989 when HAC bought the property for $475,000 from Kenneth Battles, converting it into a shelter that currently serves mothers and their children. Initially, the Battles family was hesitant to sell to HAC because of its plan to use the home as a shelter. That changed after they met with HAC staff who explained their vision for the property. Over the years, the family has become supporters of HAC’s work, donating more than what the agency paid for the home.

Pat Caron, HAC’s compliance manager who worked on the Carriage House grant, was pleased to see the nonprofit receive the funds necessary to replace the windows. “This will make sure we are able to maintain the character of the building,” she said, adding there is a more practical benefit to those living there. “There are a lot of drafts with the current windows and as far as the kids, this will give them a much safer environment to live in.”

The project, which is expected to take two weeks, began last week. Contractor Scott Johnson of Sandwich has been tapped by HAC to conduct the work.