Housing Assistance continues to tackle this issue through its housing development efforts which includes 30 affordable rentals currently being constructed at Brewster Woods in Brewster; 42 affordable rentals at Cape View Way in Bourne, which are in the permitting stage; and 39 affordable units at 950 Falmouth Road in Mashpee, which are fully permitted and in the financing stage. 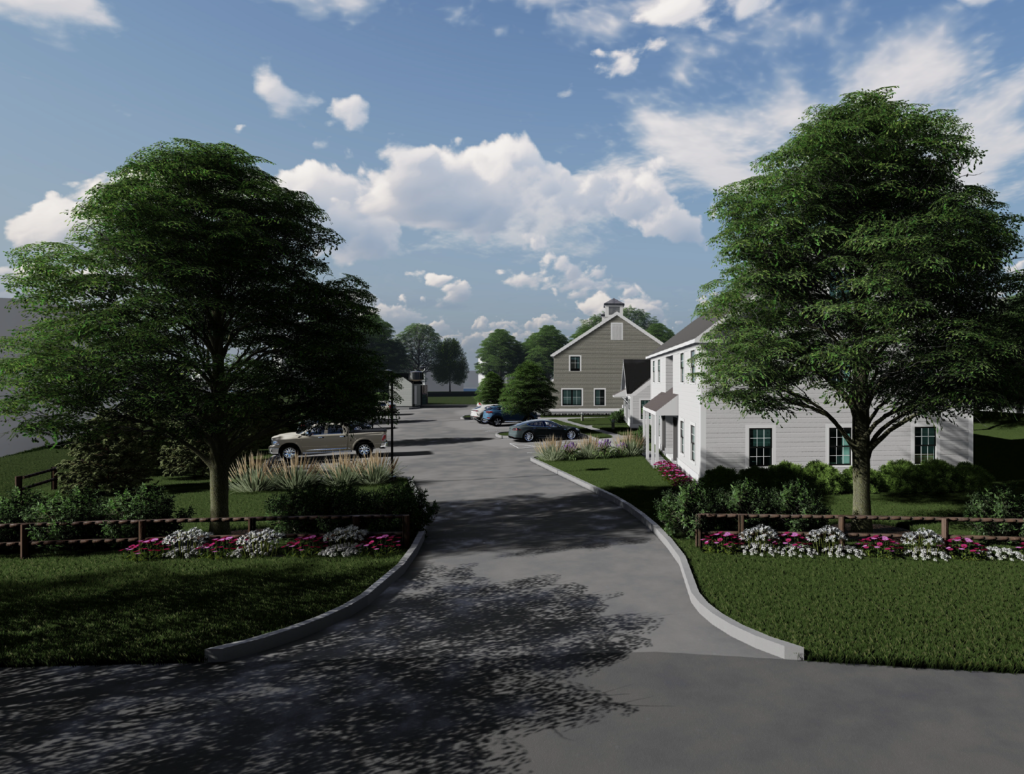 107 Main Street in Orleans will consist of 14 apartments in farmhouse-style buildings which will replace a building that once served as a Masonic Lodge.

In December, Housing Assistance added another development to its slate of projects when the Orleans Select Board and Affordable Housing Trust Board voted unanimously to give our organization control of a 1.3-acre parcel at 107 Main Street that was previously the home of a Masonic Lodge.

That project will create 14 much-needed affordable apartments to the region. According to Director of Housing Development and Planning David Quinn, “This project hits a sweet spot for us; it’s a small infill development and is a scale that we believe we can get permitted and funded more quickly than larger projects. In many ways, it’s similar to the Lofts at 57 in Hyannis, which we completed in 2020.”

Infill developments add increased housing density in areas that already have development and infrastructure in place. “In many cases it is redevelopment as opposed to greenfield development so you’re adding additional units in areas already built out,” Quinn explained. “It has much less impact on the environment. You’re not clearing out forests to build new housing. You’re putting it in more compact spaces in village centers and areas that have more buildout, have more walkable areas, and are closer to transit.”

In Orleans, the existing commercial building on the property will be demolished and replaced with a building that better matches the architecture and use of the surrounding neighborhood.

Thanks to a $150,000 grant from the Barnstable County License Plate Grant Program, Housing Assistance and the Association to Preserve Cape Cod are seeking to identify, in part, which parcels of land in more dense sections of the Cape would present opportunities for creating infill developments similar to 107 Main Street in Orleans.

Housing Assistance’s 107 Main Street project received a boost when the state allocated $1 million in funding thanks to a budget amendment filed by Senator Susan Moran that was approved by Governor Charlie Baker as part of an ARPA (American Rescue Plan Act) bill he signed into law last month.

The Orleans Affordable Housing Trust has committed another $876,625 in funding toward the project along with donating the land to Housing Assistance which the trust purchased in 2020 from Cape Abilities for $480,000.

Director of Housing Development and Planning David Quinn, who hoped to have all financing in place for the project to move forward in the fall, praised town officials for “the foresight and involvement it has had. They are committed to the project and through their efforts this is happening. They should be commended for the support they have shown. Development is not easy and there’s a lot of moving parts. They’ve been really adaptable and are a great partner on this project.”