Music as a Form of Therapy

She banged on a drum, shook egg shakers and waved see-through scarves, all while singing songs about little Johnny Brown and Jack in the Box to the delight of six children, ranging from infants to toddlers at HAC’s Angel House, in early June.

Once a month, Rachel Youngling brings this colorful, playful scene to both the Hyannis shelter and Carriage House shelter in North Falmouth. She has been doing so since February 2015 as a volunteer, wanting to expose mothers and their children at the two shelters to the beauty and power of music. This past December, she received two grants – one from the Mid-Cape Cultural Council and the other from the Falmouth Cultural Council – that are funding her work this year.

Even if she did not receive the funding, Youngling admitted, “I would be doing this anyway… That’s how important I feel it is.”

Youngling, who owns Musical Discoveries in West Yarmouth, has been offering early childhood music education on Cape Cod for the past nine years. She can often be found inspiring children at area preschools and libraries. She expanded her presence to HAC’s homeless shelters last year after hearing WCAI host Mindy Todd talking about Angel House on “The Point” and realizing that those being served at the shelter could benefit from an exposure to music.

Building Bonds Through Music
During her sessions, she focuses on getting mothers and their children to connect with one another through play and creative exploration. Underlying it all is one goal: to have fun. Youngling does that “by keeping it exciting and bringing in rhythm instruments and scarves to promote rhythmic development,” she said. “Every class, they play along with a basket full of different items such as triangles, drums and tambourines.”

Though she serves as the facilitator, Youngling encourages the mothers to get involved and lead by example for their child. “Every child’s number one teacher is their parent,” she explained. 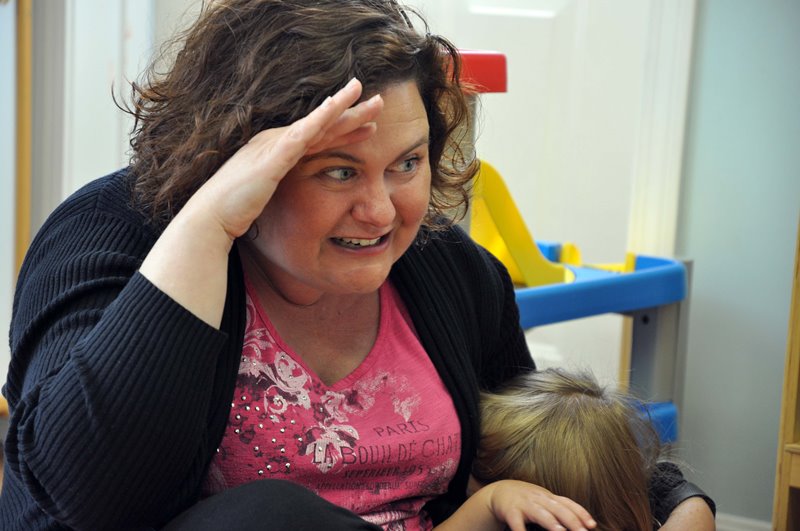 The results at both shelters have been promising. “We’ve seen the women make an amazing connection with their children,” Youngling said.

Angel House Facility Director Lin Rohr said the classes have presented “a vibrant dynamic” in which mothers and their children have been able to playfully express themselves through movement and music. And Youngling’s underlying goal is being met as Rohr noted, “it is just fun.”

For those who have experienced significant trauma in their lives, Youngling said, it is important to have the types of moments she provides, if even for a short while. “To be able to find that space where you can be happy, even if it is just 45 minutes, it makes such a difference,” Youngling said. “That’s why I love what I do: the power to help each individual find some happiness and joy in their immediate situation.”