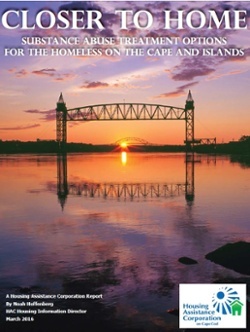 Substance abuse treatment that serves homeless Cape and Islands residents is lacking, leaving the fringe demographic at risk and perpetuating the cycle of homelessness, addiction and societal expense, according to a new white paper written by Noah Hoffenberg, HAC’s director of housing information.

In “Closer to Home: Substance Abuse Treatment Options for the Homeless on the Cape and Islands,” the report finds that treatment in the region is limited; most sites are far away; and that wait times for a treatment bed can drag into months. While these difficulties pose problems for Cape Codders at all income levels, the danger for homeless people is magnified, as they have no housing, few resources and little in the way of support systems once they emerge from treatment. Relapse and treatment rates for the homeless are high, but can be mitigated by stable housing during and after treatment, studies cited in the report show.

Almost universally, experts cited in the HAC report decry the state’s lack of treatment beds. Daily occupancy for Massachusetts’ 868 detox beds hovers between 91 and 100 percent. Waits for detox average three to five days, and only 17 percent of the people emerging from detox can get a bed at a rehab facility because of lack of space. For people seeking long-term residential treatment, waits along coastal Massachusetts are close to a month. And for those seeking specialized treatment, such as the homeless, waits can be as long as 10 weeks.

The Cape and islands do have substance abuse infrastructure, but like the rest of the state, demand is greater than the supply; on Martha’s Vineyard and Nantucket, the vacuum is even more acute. The region has one detox and one rehab facility, as well as two long-term recovery homes, but only 60 percent of substance abuse clients from the Cape and islands can be served here because of limits on capacity. Since the numbers of Cape Codders and Islanders with substance abuse disorders could easily fill all Cape treatment beds, it means that people seeking treatment – homeless and otherwise – must leave the region to receive services. Meanwhile, studies show – and Gosnold CEO Raymond Tamasi agrees – that treatment closer to home is far more effective than treatment afar.

The costs of the existing Cape system are high; one study pegged the cost of treatment and recovery at about $51,457,000 in 2013; related costs for law enforcement and corrections came to $56,900,000. Cape Cod Hospital alone, for example, reports that there’s been a 78 percent increase in Emergency Center (EC) staff hours to deal with behavioral health and substance abuse cases between 2011 and 2015. The hospital now deals with an average of 10.5 of these patients every 24 hours, with an average stay just shy of a day. By comparison, most other serious EC patients – such as cardiac cases – leave for the next level of care in less than six hours; the hours spent by the homeless in the EC is reflective of the absence of places to send them for treatment.

The HAC report compiles local, state and national data from governmental and independent studies, and takes a close look at what treatment options are available here, as well as effective examples elsewhere.