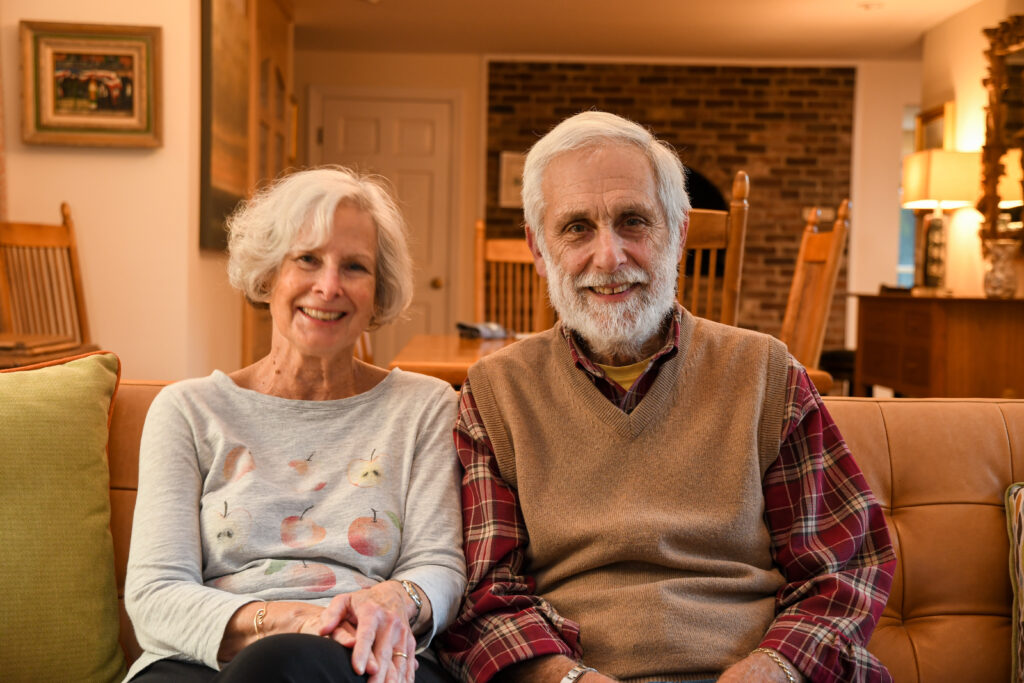 The drive from Orleans to Bourne is a little less than an hour. The distance hasn’t stopped Scott Barron from making that trek from his Orleans home, nearly once a week for the past 17 years, to volunteer at the Village at Cataumet.

Scott’s experience as a volunteer – until the pandemic, he would drive clients to go shopping every Tuesday while also picking up groceries for the Bourne shelter – was inspiration for he and his wife Pat to strengthen their support of Housing Assistance by eventually becoming donors.

The pair have also been impressed with the direction of the agency since January 2017 when Alisa Magnotta was named only the second CEO in its 46-year history. “Because we’ve become so familiar with Alisa and the people at Cataumet, Housing Assistance has become one of our favorite charities,” Scott said.

The Barron’s introduction to Housing Assistance occurred through the Falmouth Jewish Congregation. “In 2003, I joined their Social Justice Committee and I talked to Rabbi Lieberman and said, ‘I need to get involved in social justice,’” Scott recalled.

Rabbi Lieberman suggested Housing Assistance, leading Scott to become a dedicated volunteer at the Village at Cataumet. In 2013, he was recognized for his efforts with our Volunteer of the Year Award.

Both Scott, who previously owned the retail store Head & Foot Shop in Orleans, Dennis Port, Chatham, and Provincetown, and Pat, a former college professor at UMass Amherst and UMass Lowell, are now retired. In the later stage of their lives, they are looking for ways to make a meaningful impact on this place they proudly call home.

It’s why they decided to support our Housing Legacy Fund for five years, from 2019 through 2024 when Housing Assistance turns 50. The fund was launched in 2018 as a way to generate ongoing income to support our programs to give low- and middle-income residents across Cape Cod and the Islands access to safe, stable housing. A goal for raising $1 million for the fund has been set when Housing Assistance eventually celebrates its semicentennial anniversary.

“We’ve always felt that what goes around comes around. If you have the ability to help others – it doesn’t have to be financially, it can be as a volunteer – you should do what you can,” Scott said. “If everyone gave back a little, this would be a far better country.”

When the pandemic hit in March, Housing Assistance had to make the difficult decision to temporarily halt all in-person volunteer opportunities.

It has meant that Scott Barron has been unable to volunteer his time at the Village at Cataumet, a former motel that has served as a family shelter in Bourne since 2002. For nearly 17 years, the Orleans resident has volunteered there once a week, using the shelter’s van to take clients shopping every Tuesday.

Over the past eight months, Scott has missed this weekly ritual so he regularly checks in with Village at Cataumet Administrative Assistant Margaret Peters to see how shelter staff and clients are doing.

As to why he and his wife Pat have such an affinity for the shelter, he recalled one client he would talk to during his weekly trips to the grocery store. She was a mother in her late 20s with two young children. She had come to the shelter after leaving an abusive relationship.

“Cataumet had given her a new life and after seven or eight months she moved out,” Scott said. “A couple years later, [former shelter director] Paula Mallard told me she was doing really well. She had found a really nice guy, was getting married, and things were looking really good for her. It really touched me. The shelter really saved someone’s life and had given them a new direction.”