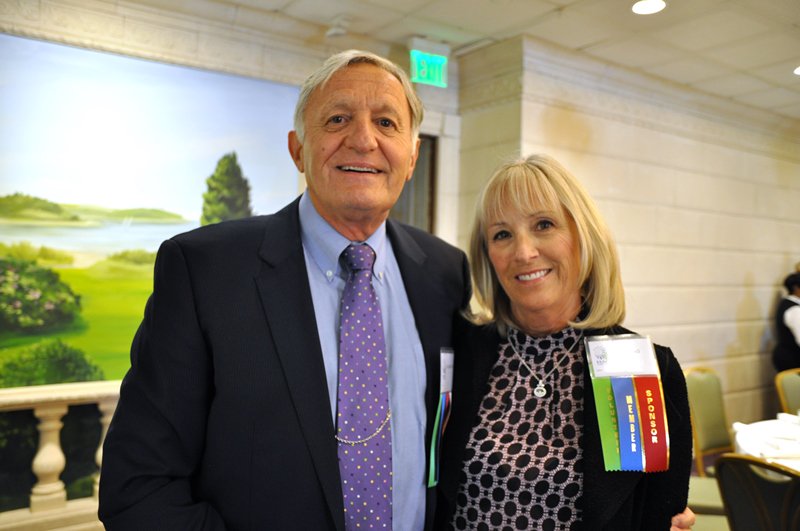 Michael and Area Princi at HAC’s Annual Meeting in 2017. The pair have been longtime supporters of our work, organizing a Gift Basket Party for clients in shelter during the holiday season.

This year, HAC is celebrating its 45th anniversary and for 41 of those years, Michael Princi of Marstons Mills has supported the agency in its work to ensure all on Cape Cod and the Islands have access to safe, secure housing.

An attorney and senior partner in the law firm of Wynn & Wynn in Hyannis, Princi’s initial involvement with HAC was focused on his profession. “I started to do some legal work, most of it on a pro bono basis,” he said.

For Michael and his wife Area, giving back to HAC is rooted in their identity and has extended to serving meals to the homeless and collecting gifts for homeless families during the holidays.

Their efforts are tied to the belief that everyone deserves a home. “In order for people to move forward in their lives, the most important thing we can give them is a roof over their head,” Michael said. “Many people on the Cape did not have that available to them before Housing Assistance came along.”

That basic concept, he said, was something that “I identified with, in terms of wanting to give my time and efforts to.”

While housing is HAC’s primary goal, Michael noted that over the years its work has expanded to empowering families and individuals through such programs as its financial literacy classes which help clients maintain their housing through budgeting and improving their credit.

“As HAC’s services have grown in size and scope, Michael is proud to have been affiliated with an agency that has helped so many over the years. “I feel like I’ve been part of the fabric, I’ve been with HAC so long,” he said. “A number of people and companies have been so supportive of HAC because they genuinely feel what Housing Assistance Corporation does is of tremendous importance to our community.”

Why We Give: Michael and Area Princi

At the beginning of last month, Michael and Area Princi organized their 28th Annual Holiday Gift Basket Drive, collecting presents that went to 50 families in HAC’s four family shelters – Angel House in Hyannis; Carriage House in Falmouth; Scattered Sites in Hyannis; and the Village at Cataumet in Bourne.

It’s a tradition that began with Michael and his first wife who passed away shortly after establishing the event. “The boys and I wanted to continue that tradition very much in memory of her,” said Michael. “When I remarried two years later, Area and her family blended into mine and we’ve expanded on it and continued it together for the past 26 years.”

With their children, Patrick, Peter, and Brendan, the Princis have been able to build a holiday drive that went beyond the confines of their home and now extends to their family, friends, and colleagues. “At the highest point, we did about 70 families and a number of homeless individuals,” Michael said.

While participation ebbs and flows, Michael said, “every year we manage to get 45 to 50 families allocated out so they all get Christmas baskets.”

Admittedly, it is a lot of work to organize the annual event, requiring the help of HAC staff as well as Michael’s legal assistant, Aimee Uhlman.

All of that effort is worth it for the Princis as they know those receiving gifts would have little to nothing to open on Christmas morning. “We play Santa for people who otherwise don’t have much or anything at all under their trees,” Michael said. “For many of the people who participate, the idea of anonymous giving is important to them… They are doing it truly out of the kindness of their hearts because they know there is a need and they are fulfilling that need.”