Building a Sense of Home and Safety 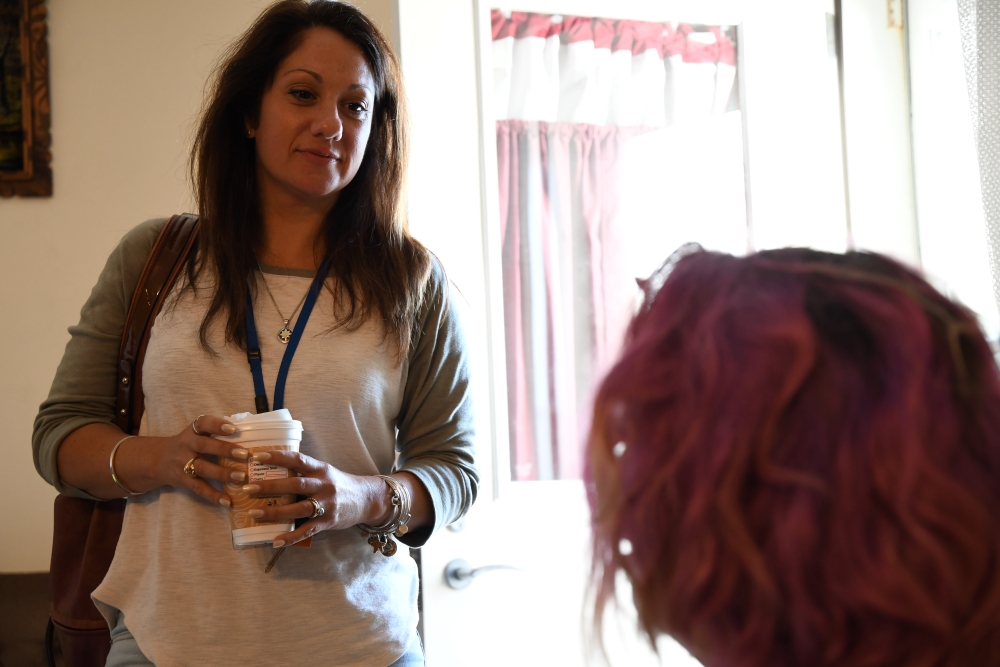 Zelda Bergstrom (left) talks with Stephanie, one of the clients in our Youth Homeless Services Program, who we were able to place into permanent housing.

For five months last year, Stephanie* lived in the woods of Cape Cod where she dealt with everything from raccoons crawling onto her tent to the local police giving her two days to gather all her belongings and move to a new location.

She slept on a queen-sized air mattress and kept her food and clothes in plastic bins.

She relied on her boyfriend for emotional support and the local food pantry for nourishment. Her diet consisted primarily of spaghetti and raviolis, straight out of a can. “I was very thirsty and didn’t have any water and had no money,” she said.

For someone who grew up in the foster care system and has endured physical and sexual abuse, life hasn’t been easy for Stephanie. But over the past year, she has had the support, help and guidance of Housing Assistance Case Manager Zelda Bergstrom, who is overseeing the agency’s new Youth Homeless Outreach Program.

“Even at the worst of times when I wanted to give up, I didn’t. Somehow I stayed strong. I had a feeling that one day things will get better. Now they are.”  — Stephanie

Zelda worked closely with Stephanie to help her fill out housing applications and access additional resources to stabilize her living situation.

“No one but Housing Assistance seemed to care,” Stephanie said. “I was homeless and they were the only ones that helped.”

Despite all that she has endured, Zelda said Stephanie was committed to turning her life around. “She is responsible and follows through and is willing to do the work it takes to get housed,” Zelda said.

With Zelda’s help, Stephanie was able to finally find an apartment on the Upper Cape where she lives with her boyfriend. Housing Assistance has provided Stephanie with a rent stipend and paid her phone bill for a few months to “give her a little relief,” Zelda said.

“I look at this program kind of like being a parent from the outside,” Zelda said. “We’re helping her financially, helping with rent, helping with her phone bill, being supportive and giving her help she is not getting anywhere else.”

Because of that support, Stephanie is at a place where she has never been before – hopeful for what the future will bring. “Even at the worst of times when I wanted to give up, I didn’t. Somehow, I stayed strong,” she said. “I had a feeling that one day things will get better. Now they are.”

*Stephanie’s name has been changed to protect her identity.