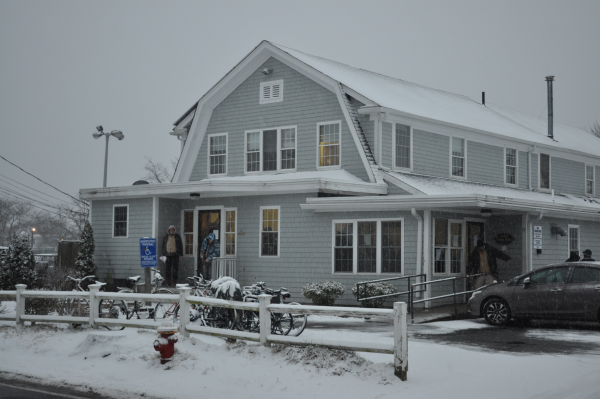 The first snowstorm of 2015 was a significant one, dropping over two feet of snow on most parts of Cape Cod and shutting down schools, businesses, government and commerce for nearly two days.

While most people spent their time in the comfort of their own homes, the Cape’s homeless men and women did so wherever they could find safety. For 60 people that meant HAC’s NOAH Shelter which had a line of people waiting to get in the facility when it opened at noon on the Monday the first snowflakes started to fall. “We don’t see that usually,” shelter director Greg Bar said. “That just goes to show you whether you are rich or poor, storms get you panicky.”

In preparation for the blizzard, Bar stocked up on essentials – flashlights, first aid kits and food in the event dinners from donors did not make their way to the shelter. Blankets were stockpiled to make them accessible if the power went out. “We looked ahead to make sure we were one hundred percent self-sufficient,” he said.

With the shelter at capacity, he anticipated a small contingent would have to sleep in the foyer.

Anytime these types of extreme weather events hit the region, Bar said, it can create a mixture of tension and boredom in the shelter as cabin fever starts to set in. It is why Bar welcomed any sort of entertainment – a guest leading a group activity or discussion or a musician entertaining clients – in the future when a similar-sized storm starts to subside.

In what has been a stroke of good fortune, Bar said that the Cape’s homeless have been relatively lucky as “there have been no tragedies because of the weather. I hope that continues.”

Of course, that could always change. In advance of the January storm, there were a few homeless who were planning on remaining outside despite pleas from advocates like Bar and Dan McCullough, director of TEAM M25, a homeless outreach group on the Cape.

McCullough, who often works with the homeless who sleep in camps in the woods, said most were finding temporary shelter elsewhere, whether being put up at a local motel, couch surfing with a friend or at NOAH.

He knew of a small group that had planned to stay in the basement of an abandoned building near the Hyannis Airport. “We have done the best we can,” he said, noting that those who did stay outside were given extreme weather gear, from tents to sleeping bags to blankets to clothes, and understood the risks involved.

With 20 years of experience working with the homeless on Cape Cod, McCullough said he realizes that there are those who “have the capacity, intelligence and imagination to stay outside in weather like this. And they almost always survive if they can put up with the discomfort.”

Still, the preference for those like McCullough and Bar is that these homeless people accept help in storms like this. “There are alternatives for people,” Bar stressed.