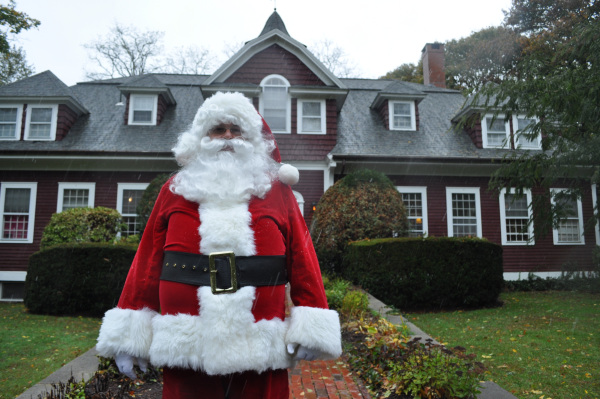 The calendar said November 2, but the light snow falling on the ground and cold winter breeze made it seem more like December 25.

But it was not solely the weather that added to the festivity of the day. It was the spirit of giving, encompassed by more than 100 motorcyclists who showed up to the Carriage House Shelter in North Falmouth, to show their support of those who are less fortunate.

That charitableness was tied to the 15th Annual Chris Wetherbee Memorial Toy Run, an event in which bikers from on Cape and off gather at the Buzzards Bay Eagles Hall and make the trek to Falmouth to deliver toys to children staying at HAC’s three family shelters – Carriage House, The Village at Cataumet in Bourne, and Angel House in Hyannis.

For the past 25 years the Cape Cod Harley Owners Group (HOG) have been collecting toys and monetary donations every fall to go to the region’s homeless children during the holidays. In 1999, the run was named in honor of Christina Wetherbee, a longtime participant in the annual event.

Though Christina died of cancer in April 2000, her husband Joe Wetherbee and his second wife Clarissa, continue to organize the event in her memory. In addition to the dozens of toys collected, participants raised $1,513, funds that will be distributed to HAC’s shelter programs as well as families in need during the holiday season, including previous clients.

The giving did not end there as Joe commemorated the occasion by donating a handmade wooden rocking horse to Carriage House that he modeled after a motorcycle with a license plate reading, “Mass 15 Toy Run” on the back.

“It’s really because of the children. That is why we are here,” Joe Wetherbee said. “We try to give them a Christmas.”

Because of the harsh weather the toy run was missing one aspect – the roar of 200 motorcycles driving down Cape roads – that makes the event so impressive. Still HAC CEO Rick Presbrey said it did not diminish from this year’s run. “I thought it was great that so many people were there on such a horrible day,” he said.

East Falmouth’s Steve Webster was the only participant to brave the inclement weather and ride his motorcycle to Carriage House as others wisely chose to drive their cars and trucks. “I’ve been doing this for about 10 years,” Webster said, acknowledging that he does it, like others do, “for the kids. It is a great cause.”

Inside the shelter he was able to warm up with chili, clam chowder, hot dogs, warm apple cider and coffee, provided by Seafood Sam’s of Sandwich and Falmouth as well as Starbucks of Hyannis. Brothers Jeff and Michael Lewis, who own the respective Seafood Sam’s eateries, were joined by Bob Courtemanche of Mashpee, and Chris Lerch of Sysco Boston, in preparing the food. 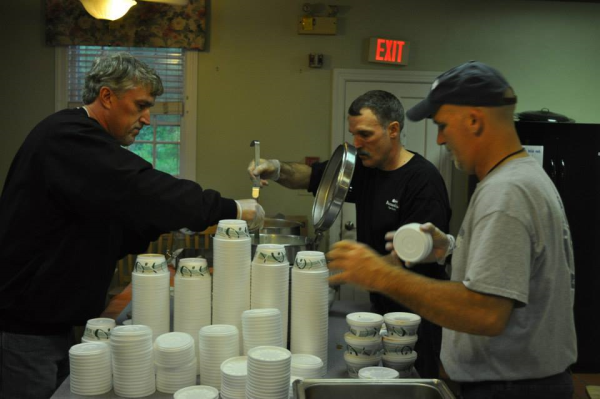 As they worked in the kitchen, several clients sat in the Carriage House living room, playing with their children as they waited for participants to arrive. “I think it is awesome,” said Stephanie Anagnos, who is seven months pregnant and was joined by her 20-month old daughter Althea. “I think it is really cool that so many people care about the situation we are in. I appreciate it a lot.”

It was a sentiment her counterparts shared including Brianna Sheinis. This Christmas, she said, her two-year-old daughter Taryn hopes to get more Barbie dolls.

As for what she wants, it is something not found in a store. “I want a safe home,” Brianna said, her voice lingering for a second. “A safe, stable home. Definitely. It would mean the world to me and it would allow my daughter to thrive and mean that I would be safe and comfortable. It is tough having to bounce around, especially with a child. It is very tough.”