In July – the same week that the 22nd Annual Bob Murray Housing with Love Walk was being held – the state threw its support behind the day center at NOAH and the timing could not have been more perfect.

In front of nearly 75 onlookers, including more than two dozen walkers, standing outside the John F. Kennedy Hyannis Museum on Main Street, Aaron Gornstein, the Massachusetts undersecretary for housing and community development, announced $200,000 in state funding for the new initiative being undertaken by HAC in collaboration with, among others, the town of Barnstable, the Greater Hyannis Civic Association, the Hyannis Main Street Business Improvement District and Duffy Health Center.

“I knew Bob Murray very well over my career,” Gornstein told those in attendance. “I know he would want us to fund this program.”

That program, opening the NOAH Shelter to the homeless during the day, began in May though the planning process began long before that. And Gornstein, who witnessed firsthand the preparation involved in opening the day center, marveled at the cooperation among the organizations involved. “It is unprecedented,” he said. “I have never seen this kind of collaboration across all the different interests come together around an important issue of homelessness in this town. And I was so impressed that we had to find a way to come up with the funding to get this program going.” 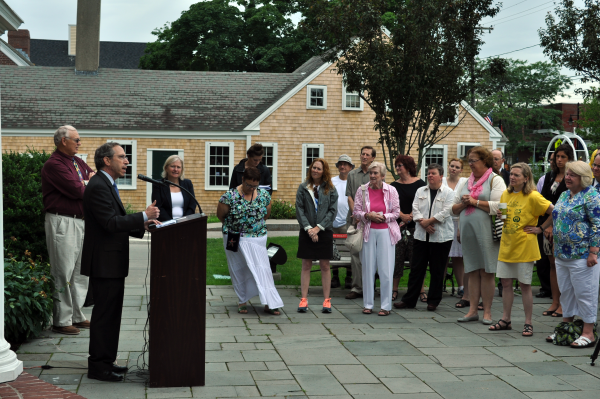 Along with the $200,000 for the day center, Gornstein also informed the public that the NOAH Shelter will also see a boost in its overall funding as part of a commitment by the state to increase its support to individual homeless shelters throughout the Commonwealth.

The good news for the day center did not end there as Bert Talerman, an executive vice president for Cape Cod Five Cents Savings Bank, handed HAC CEO Rick Presbrey a check for $10,000 to support the new initiative.

“This is a great preliminary success story. This is really the preface to the real story,” Presbrey said. “A big part of this is accountability to demonstrate to the community what we want to do, what we are doing and what we have done as a collaboration. If that doesn’t happen none of this is worth it.”