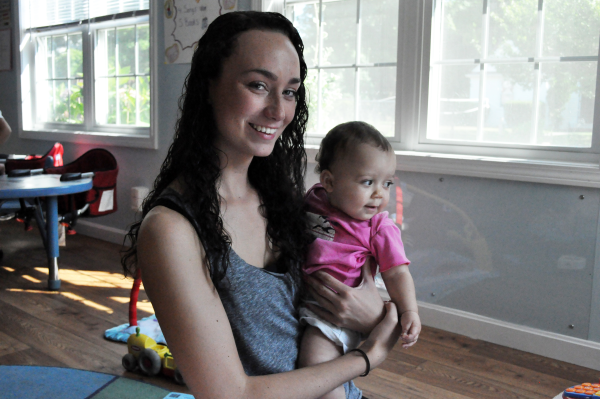 Though Rebecca Brigham is only in her junior year at the University of Massachusetts, she already knows she wants to work with children once she graduates.

“That is where I am aiming,” Brigham said while inside the play space at Angel House at the end of August, two days before she returned to college.

Brigham’s first real practical experience working with children occurred in this same spot at the Hyannis shelter where she was an intern this summer. There she was supervised by her aunt, Amy Brigham, the assistant teacher at Angel House.

“I wanted to see the clinical side of this,” Rebecca said. “And I love kids too so that helped.”

So once a week starting in June, Rebecca would visit the play space, holding, feeding and caring for children as young as a few weeks old, some of whom were born addicted to drugs.

Rebecca has witnessed firsthand, and played a significant role, in the development of these children in their formative years. “It has been an amazing program, just the way every kid is given their own personal regiment,” Rebecca said. “They kind of cater this to each kid and their specific needs.”

While she has enjoyed working with each child, Rebecca admitted she grew attached to one who, not unlike other children at Angel House, initially, “couldn’t hold her head up, couldn’t crawl, was very quiet and kept to herself. Now she is crawling, developing and has this great personality which is an amazing thing to see.”

Interns like Rebecca are not unusual at HAC. In fact one of Rebecca’s childhood friends she grew up with in Barnstable, Allison Rolfe, also spent the summer as an intern at Angel House.

Beyond simply assisting staff in their duties, Amy said that interns are a valuable component at Angel House, allowing children who have suffered early trauma to be exposed to new caregivers. “Having new people come in here helps them to understand what life is all about,” Amy said. “Yes, there is a routine, but it’s not static and things do change.”

The internship program, Amy said, also allows Angel House staff to improve upon their own skills as they teach what they have learned to students who may one day find themselves in a similar work environment after college.