Volunteers the Secret Behind the Big Fix’s Success

Nearly 225 volunteers took part in this year’s Big Fix in Yarmouth, each with their own reason for helping complete strangers on a seasonably warm Saturday in September.

These included eight children from Boy Scout Troop 36 in Mashpee (the site of last year’s Big Fix), a former client of the NOAH Shelter, a handful of town officials from Yarmouth and more than two dozen members of AmeriCorps Cape Cod.

Here is a snapshot of a few other volunteers who made our 5th Annual Big Fix one of the most successful yet.

As owner of the West Yarmouth landscaping company Gail’s Gardens, Benson was a perfect fit for the Big Fix where she spent a few hours helping to improve Donald and Elaine Lang’s South Yarmouth yard.

Though this was her first time volunteering for the event, she has participated in similar events in Central Massachusetts. Her experience this year was so rewarding that she promised the Lang’s she would return, free of charge, to ensure their yard was well maintained.

The award for volunteer who traveled the farthest goes to Hubbard who flew in from Bremen, Georgia, to take part in the event.

Hubbard, who visits the Cape regularly, read about the Big Fix online and planned her vacation around the day of service. “I was looking for some kind of opportunity to help out with housing on Cape Cod,” she said, noting that the Big Fix is special because the results of one’s labor are both tangible and immediate.

“I thought this was enjoyable and it was so well organized,” Hubbard said. “It is just amazing what 30 people can do in two hours time.” 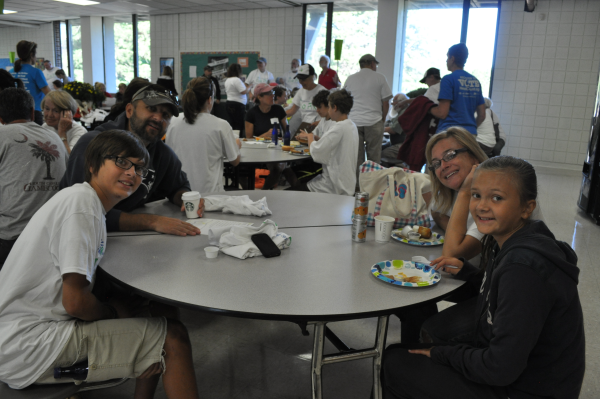 “We do this every year,” Brian Kuchar said proudly as his wife Christine and their two children, Jack, 13, and Caroline, 11, introduced themselves to homeowners Donald and Elaine Lang.

“This is important for community outreach,” Brian said, before touching upon how the Big Fix has personal significance to him. “My mother she is 83 and we would hope someone would do this for her if she needed the help… It is a lot of upkeep to own a house. When we get older we may need someone to help us because it can be too much.” 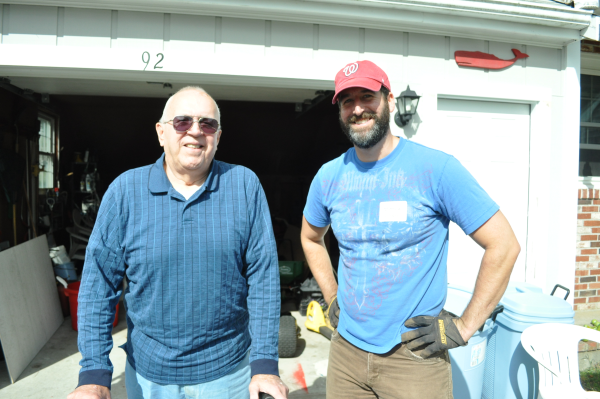 “I did this just to help out our senior citizens,” said the assistant manager of the Yarmouth Port branch of the Cooperative Bank of Cape Cod.

In the process, LoSapio, a native of New Jersey who moved to Cape Cod three years ago, found a kindred spirit in homeowner Harry Petersen of South Yarmouth. Both are diehard New York Yankees and New York Jets fans.

Despite being in enemy territory the pair had a chance to celebrate their common bond before LoSapio returned to landscaping Petersen’s front yard.

This represented the first time the HAC board member had volunteered for the Big Fix and outside of recipient Michael King’s home in South Yarmouth, she was busy clearing brush. “This is one of the most important events for HAC and as a board member I wanted to see what it is all about,” she said.

She was impressed with the number of volunteers who came out to help those like Mr. King, 68, a former school teacher who admitted it would be difficult for him to physically do the work or financially be able to pay someone to do it for him.

Twice he has fallen in his own house, leading to hip surgery about a year ago. “I appreciate the people coming to do this,” Mr. King said while sitting in a chair in the living room which had just received new carpeting, the result of the Big Fix. 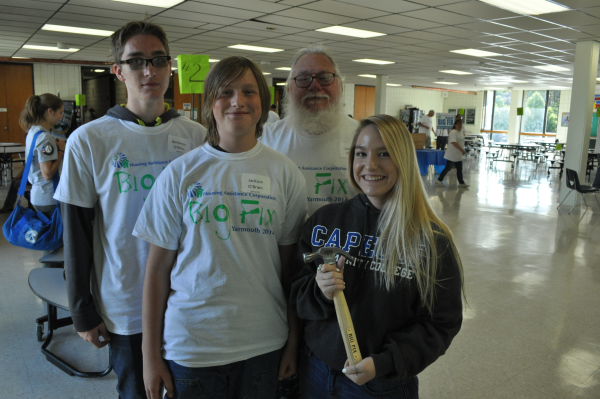 Over the past three years the Big Fix has become a family affair for the O’Brien’s. This year dad Lawrence was joined by his children Savannah, 16, a student at Cape Cod Community College, Benjamin, 15, a sophomore at Upper Cape Cod Regional Technical School and Jackson, 14, a freshman at Upper Cape Tech.

“This is a great event because you are able to help people,” said Lawrence, who accepted the Big Fix hammer on behalf of the town of Bourne from Mary Ann Gray, a member of the Yarmouth Rotary Club.

“I love coming here and meeting people,” Savannah said. “Everyone is so appreciative to receive help.”