Officially summer did not start until June 21, but three days beforehand a group of more than a dozen parents and their children got a jump start on the hectic tourist season inside the confines of the community room at HAC’s family shelter the Village at Cataumet.

Though there was no sand or ocean water, the setting had all the signs of what summer means to many here on Cape Cod: the beach.

That was all due to a few unusual visitors – a horseshoe crab and several hermit crabs – that made their way into the HAC shelter thanks to a grant the Massachusetts Department of Early Education and Care awarded to the Bourne Early Childhood Council.

That money paid for a hands-on educational session led by Kim Torres, owner of the Chatham-based company Elements, Etc., which allowed children of all ages to get close and personal with a few lively sea creatures along with some much softer stuffed ones as well.

The most entertaining part of the hour and a half long workshop were the actual animals that Torres brought with her straight from Pleasant Bay.

The horseshoe crab was first as Torres gave some key facts about it before placing it on a small blue tarp in the center of the room where it maneuvered around the small feet of children standing over it.

“See the long tail?” she asked.

“Everyone thinks there is poison in it, but there is not,” she said, explaining that the tail is used by the horseshoe crab as a swimming mechanism.

“This is the way to hold him,” she said, with her hands on the side of the animal.

And they are important to humans, currently being used as part of cancer research. “We are close to finding a cure for cancer because of their blood,” Torres said.

Torres also showcased much smaller hermit crabs which Paula Mallard, director of the Village at Cataumet, shied away from. “Those are creepy,” Mallard laughed. “I can touch the other one, but those are just creepy.”

Even some children – like Krista Hansen’s one-year-old son Noah – were initially reluctant to get too close to the animals. Eventually, Noah summoned up the courage to touch the horseshoe crab’s shell.

“That little one, he was scared during the first part of the show,” Torres said later. “It is nice to see them overcome that fear and get excited and actually learn more about science.”

Hansen, whose four-year-old son Matthew also took part in the educational workshop, was thrilled to see her kids interacting with real creatures found on Cape beaches. “I love this,” she said. “It is cool to see my kids having fun.”

At one point she even got in the act, touching the horseshoe crab after which she joked, “I want one as a pet now.”

Along with the live animals Torres had a variety of dried and stuffed animals on display including a sea star, sponges and a plush horseshoe crab. And she gave children the opportunity to color a picture of a seahorse as well as a shark.

“I think this is great,” Mallard said. “The kids are having fun and it is educational.”

The fact that children enjoyed the experience was a reward for Torres who hoped this may inspire them to explore their natural surroundings. “Most kids don’t know this is out there and that these are animals they are living with,” she said, adding that through classes like this, “they can appreciate nature and start to notice the stuff around them.” 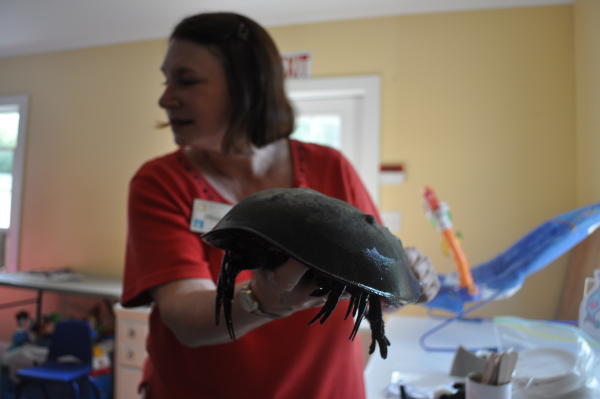