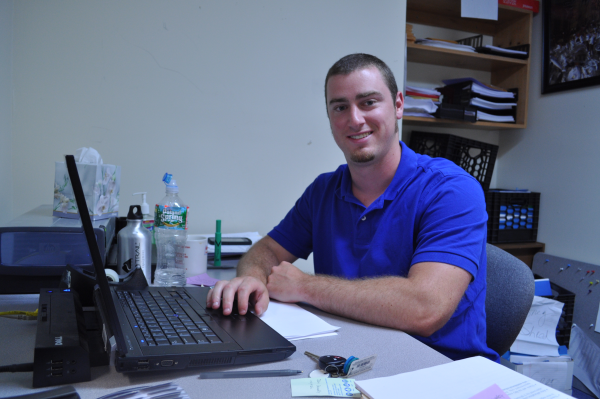 Technically, when Derick Bussiere started working at HAC in April as a housing search specialist he was considered a new employee. But to many he was a familiar face thanks to his longtime involvement in the nonprofit as a volunteer.

The Dennis native is probably best known for his musical contributions to past HAC events. He is currently the drummer for the band Twenty Eight which has performed at the Cape Walk to End Homelessness, the Volunteer Recognition Dinner and on HAC’s 4th of July parade floats.

Along with Twenty Eight, Bussiere has lent his talents to FYI (Free Your Imagination), his father David Bussiere’s band which has also played at several HAC functions.

Derick’s connection to HAC started over 12 years ago when his mother, Deanna Bussiere, the nonprofit’s event and resource development coordinator, was hired. His first days volunteering were spent helping HAC with mailings, including folding this same newsletter he is featured in this month.

His involvement in HAC activities quickly expanded to events ranging from the NOAH Shelter Telethon to the Golf Day to End Homelessness.

His mother recalled that both Derick and her younger son Devin took part in a Fun Day for all the shelters in which children worked on arts and crafts. When the pair came home Derick told his mother that one of the boys he had been working with that day did not have a home to call his own. “I let them both know ‘You should be so grateful for what you have,’” Deanna said.

It is a lesson that Derick, who holds a bachelor’s degree in criminal justice from the University of Massachusetts Boston, has kept with him to this day. His resume includes stints at the Department of Youth Services Metro Pretrial Unit and Massachusetts Mentor, where he worked with children with a host of personal issues.

Those experiences gave him an insight into how adults can find themselves in similar situations. His job at HAC is to provide not only a sense of hope to clients, but a real mechanism by which their lives can change for the better. “My job is to put a roof over somebody’s head,” he said.

He acknowledged that some cases are more difficult than others, but he has been buoyed by the successes he has had so far. That happened with one homeless woman who had been staying at the NOAH Shelter and sleeping on nearby beaches.

“She had been physically and mentally abused and had gotten kicked out of her house,” Derick said. “Just three days after she came in we were able to get her assistance and place her in a home… I gave her a call the other day and she was doing really well and had started a garden at the place. She seems to be getting back on track which is good.”

These type of stories are heartwarming to his mother who praised Derick for the compassion and empathy he has shown for HAC clients. “I’ve listened to other colleagues telling me, ‘My goodness your son is such a great addition to HAC,’” she said. “I’m so proud of his accomplishments and the man he has become today.”