HAC Provides Client Support She Needs to Attain Her Goals

Life is much easier when you have someone who serves as your coach, cheerleader and friend to help navigate the hurdles that may come your way.

Jennifer Long of Hyannis was lucky enough to find such a person in Jan Nelson, the coordinator of HAC’s Family Self-Sufficiency (FSS) Program, a little more than six years ago.

When she entered into the FSS program Nelson made these initial observations about Long: “she was a bright, energetic, young lady… she knows what she wants and she is committed to accomplishing her goals.”

At that first meeting Nelson asked Long what those long-term goals were. “The American dream: a good education, a good job, good health, a home, a husband and more kids,” Long answered.

Prior to working with Nelson, Long had already dealt with her share of hardship. She left home at the age of 17 and admitted that she “had never been taught financial stability or responsibility.”

She also suffered from adult attention deficit hyperactivity disorder (ADHD). And she not only had to learn how to care for herself at a young age, but for her son Kadin when she was 22.

The one thing she did not do is give up – securing housing, medical insurance through MassHealth, and public assistance through the state. And she also held a job at a childcare center.

Still it was easy for her to get discouraged. “It was hard to see my hard work show for nothing after bills and living expenses,” she said.

She found a glimmer of hope when her housing worker recommended Long for the FSS program while she pursued a career in the medical field as a nursing student at Cape Cod Community College.

Since being enrolled in the FSS program, Long has been able to achieve what she set out to do, crediting Nelson for playing an integral role in that journey. Nelson was the person she needed to “guide me through many difficult times,” Long said. “This program has given me hope that I am going to be a success.” 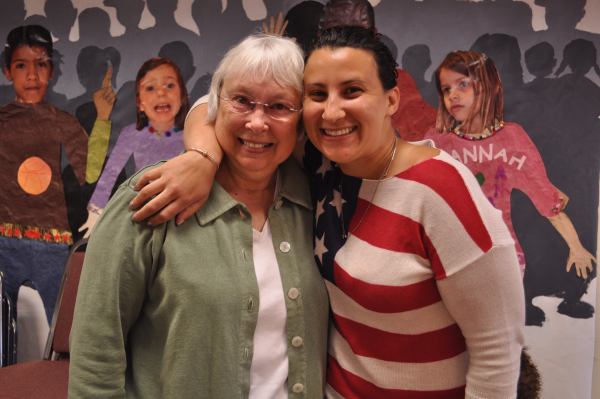 At a ceremony celebrating Long’s hard work at HAC’s headquarters in June, Nelson told Long that she is already a success. Long obtained her associate’s degree in nursing from Cape Cod Community College, becoming a registered nurse in July 2010.

She then enrolled in Curry College and will be graduating in December with a bachelor’s degree in nursing. In 2013, she became a certified nutritionist, starting her own company RNutrition Health & Wellness.

Her resume includes working at various nursing homes, with Greater Boston Home Health Care, as a substitute school nurse and a nutritionist at the YMCA.

In August 2011 she checked another goal off her list when she gave birth to Micah.

Though she still has yet to achieve homeownership, Nelson is confident that will happen sooner rather than later. Last month Nelson presented Long with a check for $28,337.94, money she earned through the FSS program which gives incentives to participants to increase their salaries and improve their careers. Any increase in their rents resulting from an increase in earned income is allocated into an escrow account. Upon completion of the FSS program those like Long are given the money that has been set aside for them as a reward for their efforts.

In the past six years, Long has been able to meet or exceed the majority of the goals she set out to achieve, but she knows there is still much more to accomplish. “Dreams and goals don’t stop,” she said. “They change. I am constantly redefining myself as a woman, and thanks to Jan and the FSS program I’ve developed the skills necessary to keep me striving for the best.”