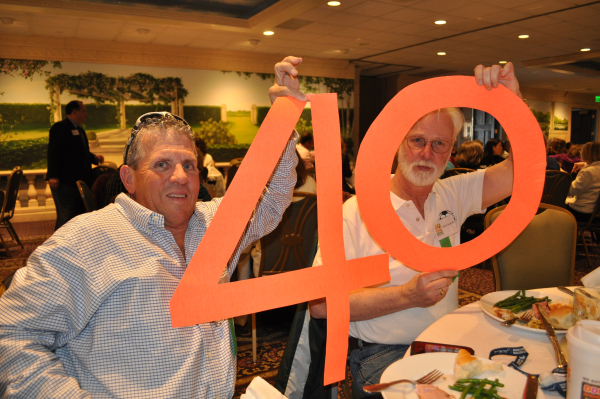 Since 1999 Gerald “Curly” Carey has run 27 marathons, but there was only one he did not finish – last year’s Boston Marathon.

The marathon bombings and subsequent manhunt for the suspects were well documented in the news, capturing the nation’s attention in the days and weeks that followed. And for many runners, like South Dennis’ Carey, it represented a difficult time. “I would say the first week afterward was very emotional watching TV and knowing that five years prior I would have been coming in at the time the bombs went off,” he said. “It was very emotional and it still is.”

He anticipated this year’s Boston Marathon – his 14th time running it – will carry similar weight. “It will be an emotional race for me, especially the last mile and a half because I didn’t get to finish last year,” he said.

Instead, like the thousands of other race participants who had not yet crossed the finish line, Carey found himself searching for loved ones – his wife Kelly was planning on watching him finish – as helicopters flew overhead and the sounds of fire and police sirens could be heard racing towards the crime scene.

He estimates he has helped raise close to $50,000 for the Dennis-Yarmouth Ecumenical Council’s (DYECH) Project Prevention since 2001 when he was inspired to somehow give back in the aftermath of the 9/11 attacks on the World Trade Center and the Pentagon. A conversation with David Akin, a deacon at St. Pius X Parish in South Yarmouth and a member of DYECH, convinced him to focus his efforts locally. “He told me we have a big problem on Cape Cod,” he said, in reference to the region’s homeless population.

Though he has run dozens of other races, Carey holds a special place in his heart for the Boston event, listing a litany of reasons from its history to its stature as a worldwide event to the difficulty of the course itself. The race also serves as a fundraiser to a cause important to Carey: fighting homelessness on Cape Cod.

Carey’s money has gone towards Project Prevention which HAC oversees and which ensures Cape Codders struggling with their bills will never find themselves on the street. “Last year I was able to raise $2,044 and through that effort at least three families were able to stay in their homes and avoid being homeless,” Carey wrote in his fundraising letter for this year’s marathon.

He expressed pleasure in being in a position to help those who are less fortunate. “When I find out where the money is going and that it keeps people in their homes it makes me proud,” he said.

Along with running marathons, Carey serves monthly meals to the homeless as a member of the Yarmouth Rotary, an experience he has found rewarding. “I have a beautiful house in South Dennis. I have a good life,” he said. “One of the things my parents taught me is you have to give back. That is what keeps me going.”

It was his mother Mary, who passed away in 1997, who he dedicated his first Boston Marathon to in 1999. To this day the 57-year-old Carey honors her spirit every time he runs the historic race which will take on special meaning this month because of the lives that were lost and those that were injured last year. “If I had to run it on crutches I would do it,” he said. “It really means a lot to me.”