This year HAC celebrates a milestone, 40 years of good work.  “The program will be more celebratory this year,” says HAC’s Director of Development and Communications Julie Wake.  “Expect the unexpected for an annual meeting!”  Matt Pitta from WXTK will host the event.

Among those being honored will be Rev. Larry Brown of Cape Cod Academy, along with his student team from People to People International, who will be given the Presbrey Public Service Award in recognition of their service to those in need on Cape Cod. The Presbrey award is given to people in the community who most exemplify the qualities and values that motivate Rick. Recent recipients include Rabbi Elias Lieberman, Dr. Kathleen Schatzberg and Rev. Dr. John Terry.

This year’s recipient of the Business/Organization Partner Award is the Town of Mashpee, who went beyond the call of duty in pulling off the biggest Big Fix event as well as adding 10 units of affordable rentals with a new development, Great Cove.

Heroes in Transition will receive the Human Services Partner Award in recognition of their support of HAC’s Project Prevention for veterans.  Heroes also played a supporting role in the Big Fix Mashpee helping to improve several veterans’ homes.

The Volunteer of the Year award goes to the Bergeron Family for their years of hard work and dedication on homelessness issues.  Wayne, Janine, their daughter Rebecca and their son Michael have played a major role in HAC’s annual event, Shelter Cape Cod Telethon.

Dinner will be served and a cash bar will be available.  RSVP by March 24 by calling HAC or going online at www.HAConCapeCod.org.

This year’s annual meeting and volunteer recognition is sponsored by Shepley Wood Products, a Hyannis based company that received HAC’s Business Partner Award in 2012. 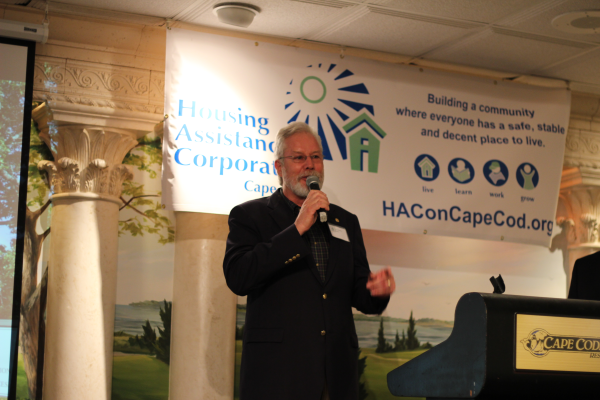