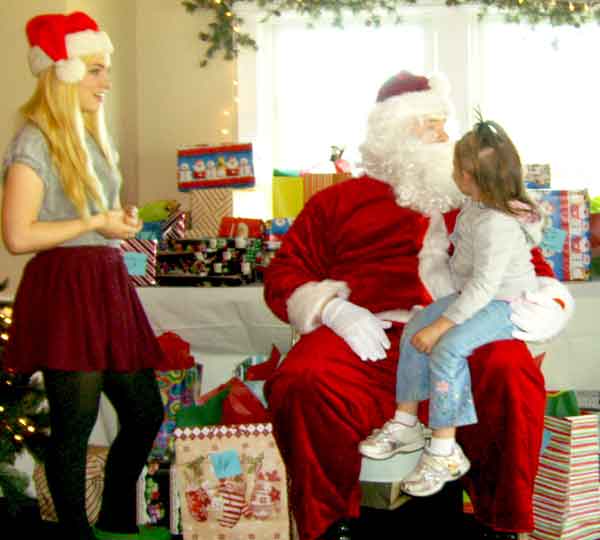 Amanda Stroh, bar manager of the Casino Wharf FX in Falmouth, wanted the restaurant to give back to the community this Christmas, so she and her colleagues came up with an innovative idea.

They threw a party for homeless families.

Amanda said she and the bar’s general manager talked about an end of the year way to give back. “We’re fortunate to have a lucrative business. It’s our way of giving back for the people who are supporting us,” she said.

She said they wanted to do a party with a meal and gifts for disadvantaged children and through a Google search, they learned about Carriage House, the homeless shelter for families that Housing Assistance Corporation runs in North Falmouth.

Katie, a staffer at Carriage House, referred them to Paula Mallard, the manager at the Village at Cataumet, another HAC family shelter.

Paula, who captured a number of photos from the event, which was held in the afternoon on Saturday, December 7, said it was a fun event for the clients. Amanda agreed.

“The consensus was it went really well. I think everyone had a good time. The staff had a good time,” she said, adding that all of the staffers working the party volunteered for the event. In addition, several teens from Falmouth High School played elves for the event.

Amanda said the party was different for Casino staffers because “we don’t normally have children’s parties here.” They had to tweak the menu to include kid-friendly items like chicken fingers, pizza and mac and cheese. But other than that, it was business as usual. “People are people,” she said.

Amanda said she would definitely like to have the party again next year. “[The idea] will definitely be revisited,” she said.