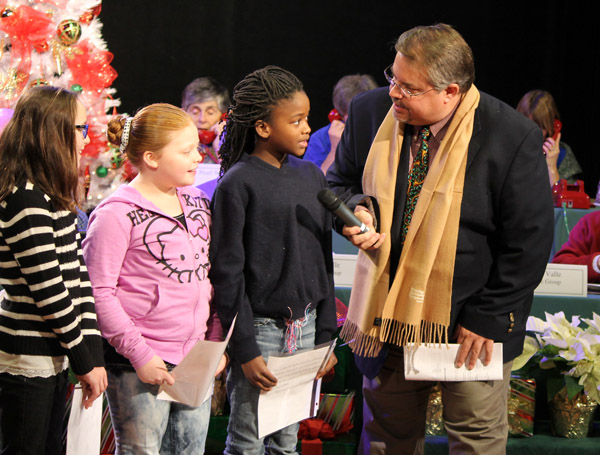 The excitement of a community coming together to help their own was in full evidence at the Shelter Cape Cod Telethon, which took place last month on December 11. It was a festive affair as people from throughout the Cape gathered at Cape Cod Community Media Center in Dennisport for the five-hour television show. It was aired on local cable access channels  throughout the Cape.

Housing Assistance Corporation set an ambitious fundraising goal for this year’s telethon of $100,000, which is in sight as more donations continue to come in. The telethon featured video and live performances, special guests and, new this year, students reading essays on the topic of homelessness.

This was a banner year for the event on several counts. For the past nine years, the telethon was called the NOAH Telethon and funds raised went only to the NOAH Shelter in Hyannis. But this year the event had a new name and a new mission. It was called the Shelter Cape Cod Telethon and instead of just benefiting the NOAH Shelter, it also benefited HAC’s three family shelters: the Village at Cataumet in Bourne, Angel House in Hyannis and Carriage House in North Falmouth.

Among the special guests at this year’s telethon was NOAH Shelter manager Greg Bar, who spoke eloquently to the telethon’s host, Mindy Todd, about what homelessness is like from the front lines. Before the telethon, he interviewed some of the clients from NOAH Shelter as well as staff about the issue of homelessness and read those comments on the air.

One of the NOAH clients said, “I’m grateful this place is here. I can’t say the word grateful enough.” Another said, “I feel well-supported because I asked for help and I’ve been given it.”  Mr. Bar said of the clients at NOAH, “It’s hardest to ask for help when you hurt the worst. That’s where these people are at. Just by virtue of walking into the place, they are asking for help. That’s a tough thing.”

Besides Mr. Bar, other HAC staffers who went on air to talk about the plight of the homeless on Cape Cod were Cindi Maule, Director of HAC’s family services, Paula Mallard and Yvonne Rivers from the Village at Cataumet, and Amy Brigham from Angel House.

The list of musical performers who recorded videos for the event was extensive. Local DJ Suzanne Tonaire served as the mistress of ceremonies in introducing the musical performers, which included the choirs from St. Pius X School and North Falmouth Elementary School, as well as the Falmouth Chorale.

In addition, Rabbi Elias Lieberman of the Falmouth Jewish Congregation performed live the song, “I Am Home.”

During the broadcast, a number of people offered their perspective on the problem of homelessness on Cape Cod. Among them were Dr. Nate Rudman, an emergency room doctor at Cape Cod Hospital and HAC board member, who talked about health issues experienced by the chronically homeless. Cyndy Jones, founder of Heroes in Transition, talked about her agency’s desire to help veterans with various needs.

Perhaps the highlight of the show was 12 fourth and fifth grade students from Nathaniel H. Wixon Innovative School in South Dennis who read essays on the topic of “What Homelessness Means To Me.” At least two of the students had personal experiences with their own family being homeless.

The event was hosted by Mindy Todd, host of The Point on WCAI, with assistance from co-hosts Sean Corcoran, also of WCAI; Paul  Pronovost, editor of The Cape Cod Times; Matt Pitta of WXTK; and Rick Presbrey, President and CEO of Housing Assistance Corporation.

Several local politicians taped messages of support for the telethon and two politicians, State Representative Brian Mannal of Hyannis and County Commissioner Sheila Lyons of Wellfleet, made appearances in person to throw their support behind the cause of helping homeless Cape Codders.