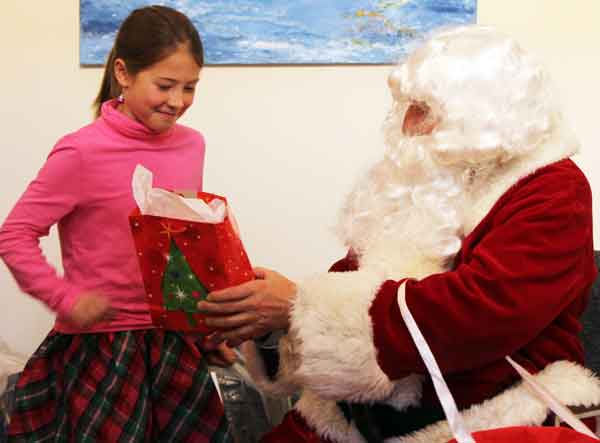 At the party Michael Princi throws every year to help homeless families, the host told a favorite story about how a small gesture can help someone in need.

He described a party he gave with his son, Patrick Princi, at HAC’s NOAH Shelter one Christmas. They brought a karaoke machine to the shelter and everyone took a turn, including Michael.

With much coaxing, one homeless woman took her turn at the microphone and Michael said the entire group was amazed at her singing prowess. “It was like ‘American Idol,'” he said. “She had perfect pitch.”

Afterwards, the woman, who had been a foster child with no family of her own, thanked Michael Princi, telling him it was the best Christams she had ever had. Her reaction captures the magic of giving, he said.

Michael Princi has held a special party for 24 years as a way to collect baskets of Christmas presents for families in Housing Assistance Corporation’s shelters. He asks friends to contribute and he said one friend thanked him for letting her buy for a family. “That’s what it’s about,” he said. “Anonymous giving. Knowing you are helping other people who wouldn’t have a Christmas.”

HAC CEO Rick Presbrey paid tribute to Dolores, saying “She has done more to help homeless families in her career than anyone else on Cape Cod. She does it year after year. It takes its toll but she keeps on doing it.” He added, “Working with people in need is a marathon, not a sprint. Keep doing it and trust that good things will happen.”