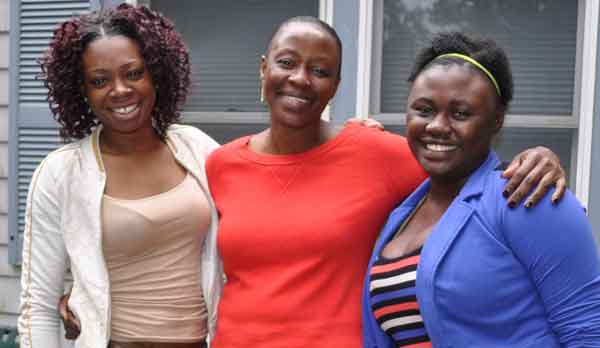 A fire meant a fresh start for Hilda Haye and her family.

Last summer Hilda was among the 16 tenants left homeless after a fire in a neighbor’s unit caused damage at her apartment complex at 800 Bearse’s Way in Hyannis.

Hilda, 44, is from Jamaica and moved to Cape Cod in 2001 as a summer worker. But after more than 10 years on Cape Cod, this feels like home, she said. She found year-round work at Cape Cod Hospital as a certified nursing assistant and then realized there were opportunities for advancement if she became certified as a diagnostic tech.

Now she works at Cape Cod Hospital as a diagnostic tech, a career she trained for with evening classes at Upper Cape Technical High School.

She became a US citizen one year ago and her youngest daughter, who is a senior at Barnstable High School, is also a US citizen, as is her 17-month old grandson, who was born at Cape Cod Hospital. Her older daughter works in the housekeeping department at the hospital.

After the fire at their apartment complex, it took months for the building to be declared suitable for occupants. First Red Cross stepped in. Then tenants, like Hilda and her family, came to Housing Assistance Corporation for help finding apartments. Displaced tenants were given a grocery gift card and one-week stay at a motel. But when those ran out, Hilda and her family were still without housing.

The family relocated several times over those months. “We bounced around with friends. I didn’t have the money for a hotel,” Hilda said. Some days she even stayed in the condemned apartment building while the rest of her family stayed with friends.

After three months with electricity still not restored at 800 Bearses Way, she decided to try to find somewhere else to live. That is where Housing Assistance Corporation’s non-profit real estate division, Cape Community Real Estate, came into the picture.

Hilda was referred to Housing Assistance Corporation for help finding a rental apartment but she soon learned that she could afford to buy a house. With the help of HAC’s Gael Kelleher, that is what she did.

“I didn’t know I had good credit. Financially, I thought it was scary because I didn’t have much money,” Hilda said.

She took HAC’s first time homebuyers class and was also eligible to use the county’s first-time homebuyer down payment assistance program which is administered by HAC.

Hilda has lots of praise for Gael’s work in finding her a home in Centerville and then helping her to close on the property. “She was excellent. She’s the best. She helped me with a lot of the details,” the happy first-time homebuyer said.

They had looked at eight to 10 houses over about two months when Gael called one day, saying, “I think I found the perfect house for you.” Hilda went to look and knew right away. “This is it,” she said.

Hilda said she finds the house to be roomy enough for her family and she loves the location in Centerville, which is convenient to her job at Cape Cod Hospital and her daughter’s school. “It’s awesome, very quiet and laid back,” she said.

Gael, who is a full-service Realtor, was even there for the home inspection.

Hilda closed on the house in June. “It was exciting,” Hilda said. Her next plan is to take HAC’s Home Forever class in September.