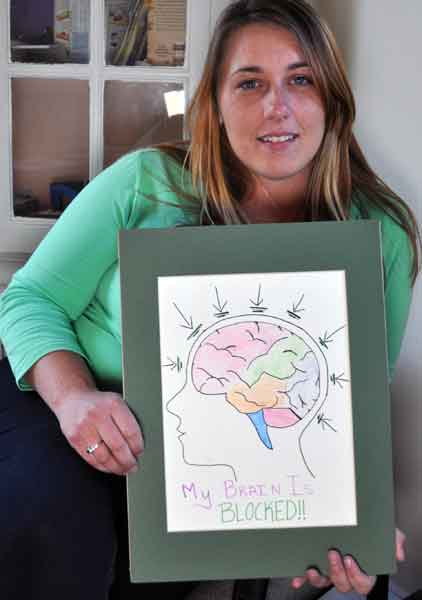 To bring a voice to the voiceless. To understand self on a deeper level. These are some of the benefits the art therapy program has brought to mothers recovering from substance abuse at Angel House.

Angel House, which houses women and their children, is one of three family shelters run by Housing Assistance Corporation.

The art therapy program began six years ago because some of the mothers wanted to learn how to knit and sew. They approached Marnie Reiber, director of Angel House, and Penny Devaney, who is a case manager at Angel House.

The two spent time individually with the mothers and eventually it became a group. And soon, it became a very popular group.

Through art therapy, Penny has been able to reach people who were very hard to reach, according to Angel House case manager Janis Goodnow. “She has helped clients uncover the beautiful side of themselves. She has brought back a true dignity to women who were forgotten or had forgotten themselves.”

In the most recent art therapy group session, the mothers worked on drawings of an outline of the human brain. Each mother had to design their own brain on canvas and express how they believed their brain worked.

According to Janis, art therapy as an aid to healing originated in the 1920s but the term was coined by British artist Adrian Hill in the 1940s when he was recovering from tuberculosis in a sanitorium and suggested artists work to his fellow inpatients. He believed that the value of art therapy lay in completely engrossing the mind (and hands) and releasing creative energy through art.

Through art, the mothers at Angel House are paying attention to themselves and their lives, Janis said. “Art therapy is an evidence-based treatment to promote good health to all who participate.”

She said art therapy is used to increase confidence, uncover defense mechanisms, make it easier to express feelings verbally, to create a sense of safety and peace; to identify feelings; and to help clients face fears and inadequacies.