Skip to content
Home/Editorial: Remembering A Friend
Previous Next 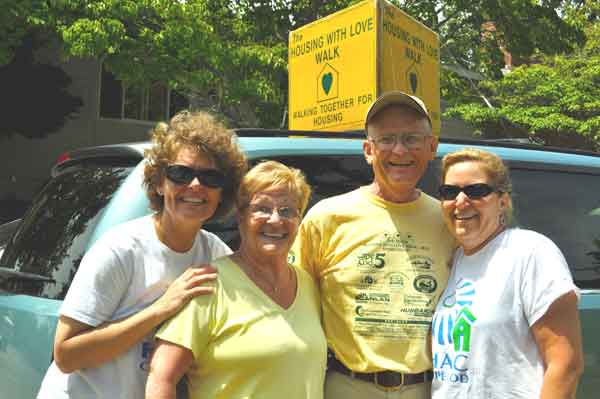 I was reminded of my own mortality a few weeks ago with the death of a good friend, Bob Murray. Bob worked right up until the end on the cause he believed in, affordable housing on Cape Cod.

I knew Bob Murray for 20 years from about the time my youngest son was born. Now Bob is gone and my son is in college. If I look at what Bob accomplished in that time, I am amazed. Time seems to pass more quickly as you get older which means if you want to accomplish something, you better move quickly. Bob certainly did that. He was very sociable and likeable but he didn’t like to waste time.

Bob worked at HAC in the early 1990s as a grant writer and did very well. He then became the Executive Director of the Falmouth Housing Authority where he remained for 16 years. Bob was the founder of the Harwich Ecumenical Council for Housing and the Falmouth Housing Corporation and was the moving force behind the creation of Project Prevention, the program that uses funds to help pay rent or mortgage payments to keep families from becoming homeless when a crisis intervenes.

He was also a very successful affordable housing developer. He may be best known for his “Housing with Love Walk” where each year in July for more than 20 years he would walk from one end of the Cape to the other to raise money for agencies that helped to house people experiencing homelessness.

Bob was a true friend to HAC. He had a very deep commitment for our cause and worked very hard for 20 years from very early in the morning until at least nightfall for the cause of affordable housing. Bob was always pushing hard towards accomplishing his latest goal whether it was to house a single person or build a 100-unit project. And he was always raising money. He could talk anyone out of money be it a bank or a potential individual donor. I know, he did it to me.

He had boundless energy and creativity and was the one person in the room who always had an idea about how to solve a problem.  Now he is gone and the Cape has lost a great resource and a great man.

Allison Alewine, HAC’s former Vice President of Operations, Family Housing Services Department: “Bob was an unstoppable force for affordable housing and his focus, thank goodness, was Cape Cod. He tried whatever he thought might work and, if it didn’t, he tried something else. One could join him or not, but he keptgoing. Ecumenical Councils bought & rented houses or raised money (grocery gift cards a special brainchild of Bob’s) so that families would be housed instead of sheltered. He’d say we are to pass it on, pay it forward. I will do
that in his model.”

Dolores Barbati-Poore, HAC’s Project Prevention Director, Family Housing Services Department: Having known Bob since he started Project Prevention in 1990, to me he was and will always be the father of [homeless] prevention, in other words, preventing people from becoming homeless. I can remember him saying, “Just $200 a month can save a family from becoming homeless.” Bob never took “no” for an answer and he never stopped thinking of ideas to raise money for prevention.

Margaret Benaka, HAC’s  Information Manager, Resource Development Department: I only truly got to know Bob when HAC joined the Housing With Love Walk. In those few years I got to know a man who is committed, compassionate, stubborn, not afraid to question, approachable, and a tireless advocate for those in need. He didn’t seem to let anything get in the way of completing a project or reaching a goal. I had the utmost respect and admiration for Bob – he was a true leader and an inspiration. Perhaps the thing I will personally remember
most is Bob’s relationship with his wife Judy. There was an undeniable mutual respect, love and admiration.  Even though Bob committed his life to the community, he didn’t seem to let his relationship with Judy suffer. They were a great team.

Deanna Bussiere, HAC’s Events & Resource Development Coordinator, Resource Development Department: Bob Murray was such an inspiration. He did not hesitate to share what was on his mind and if he wanted something to get done, he made it happen. I will miss his Cheshire Cat grin, his caring blue eyes and his typical greeting, “Hey kiddo, what’s up?” To paraphrase an anonymous author: “Good things come to those who wait. Greater things come to those who are willing to work for it.” I wonder if that anonymous author had Bob in mind?