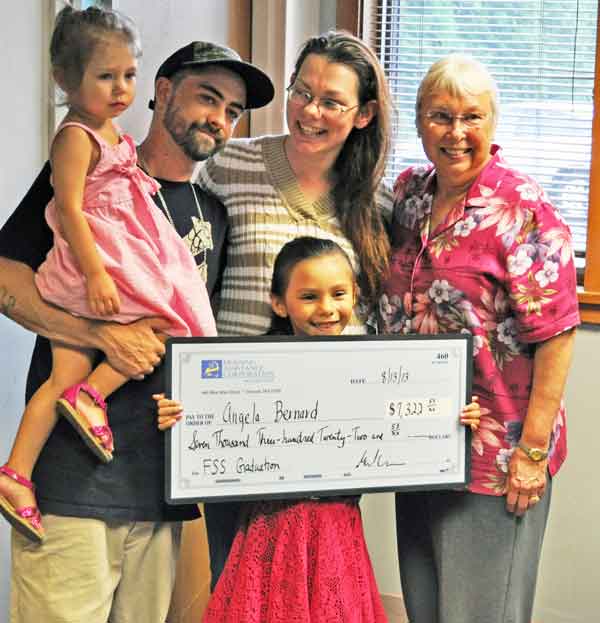 Strawberry shortcake was on the menu and achievement was front and center at the party for Angela Bernard who graduated from the Family Self-Sufficiency program last month.

Angela, 28, of Mashpee was there with her boyfriend Matthew Roy and her two daughters, Deja, 7, and Melody, 2.

When she talked about how she turned her life around through the program, Angela credited her family and good fortune. “I’ve been so blessed,” Angela said.

Jan Nelson, who administers the FSS program at Housing Assistance Corporation, said that Angela came to the program in 2010 as a single mother on welfare trying to figure out what to do with her life. Her daughter Deja was 3 at the time and Angela was interested in perhaps going to college.

“We did a lot of college exploration,” Jan said.

Angela decided to take HAC’s financial literacy class to get her finances in order.

When she got pregnant with her second child, Melody, she put going back to school on hold and got a job at Dunkin Donuts. She took all the classes the company offers in Safe Serve methods and management training. That led to a promotion to assistant manager.

One year later, she has just been promoted to manager of the Dunkin Donuts on Route 151 in Mashpee. She works six days a week at the restaurant, which is a short drive from her apartment in a HAC-owned building in Mashpee.

Angela said she is glad she participated in the FSS program. “It gave me a sense of direction,” she said. “I don’t know where I would be today.”

The way the FSS program works is that as Angela’s salary increases, her share of the rent increases and federal funds are put into an escrow savings account for her. Once she finishes the FSS program, she gets a check for that amount, in her case, $7,322.52, to use any way she would like.

The goal of the program is to move people off public assistance and into jobs and affordable
housing by meeting self-improvement goals.

Angela was surprised about how much money she had saved through the program. “I was very shocked that I made it this far,” she said.

Angela said she will use the money to start savings accounts for her daughters.