NAACP Honors HAC’s Greg Bar For Commitment ‘Above & Beyond’ 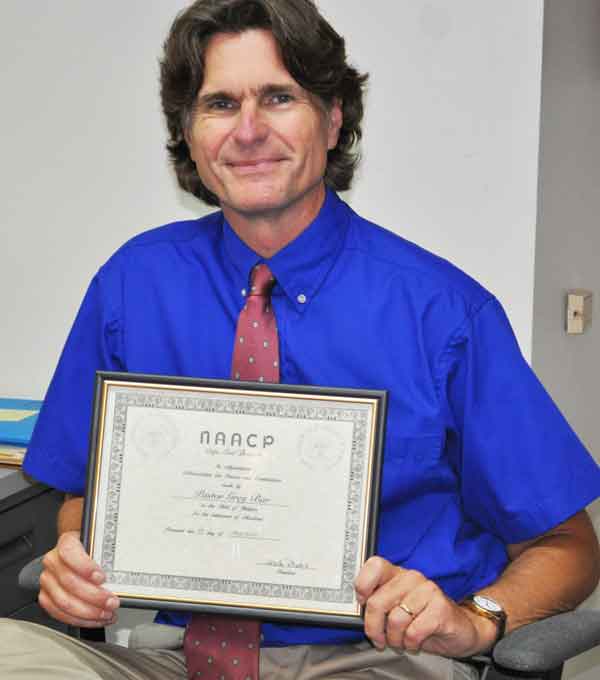 Each year the NAACP Cape Cod branch gives awards to people who step out beyond their roles, who go “above and beyond” to help people in the community, as NAACP Cape Cod branch vice president John Reed said. At this year’s award ceremony, which took place May 19 at Hyannis Heritage Hotel, HAC’s own Greg Bar was honored.

Greg Bar’s title at HAC is Housing Search Specialist in the Individuals Services Department. He has a desk at NOAH and an office in HAC’s West Main Street headquarters.

His job puts him on the front lines of the Cape’s often hidden world of homeless men and women who bed down for the night in wooded areas or in shelters.

Mr. Reed said the key to Greg’s success is that the people he serves trust him. “He’s a person they can go to for help,” he said.

Greg’s wife Karin Bar, also a HAC employee, kept the NAACP honor a surprise, so he did not know he would receive the award until a few minutes before the ceremony when the pair drove up to the hotel.

“I was stunned and honored,” Greg said. The award acknowledged Greg’s work at HAC with the NOAH shelter and also at New Road, the church he founded in 2005. The church is on Route 28 (Falmouth Road) at Phinney’s Lane in Hyannis. Greg said some call the non-denominational church, the “un-church,” because of its outward focus on service to the community.

Greg said the timing of the award had significance for him. The previous Monday before the award ceremony, he had been a little bit dejected—“I felt a little ‘dip,’” is how he put it. The award got rid of the “dip.”

“I don’t do what I do to get any kind of anything, but to be recognized for this, it reaffirmed we’re spot-on with what we’re doing as a church,” he said.

“The honor went pretty deep in my heart,” he said.

Greg has been a pastor since 1983. He started at a church in Greenwich, Connecticut and later ran a church on Martha’s Vineyard, the Vineyard Assembly of God.

Through his job at HAC, Greg helps people navigate through rough times, connecting them with other services. He counsels them, “gives them hope and makes them feel cared for.”

He said he tells them, “I will stick with you until this gets solved. I’m not going to give up on you.” It is that caring attitude that the NAACP chose to honor.