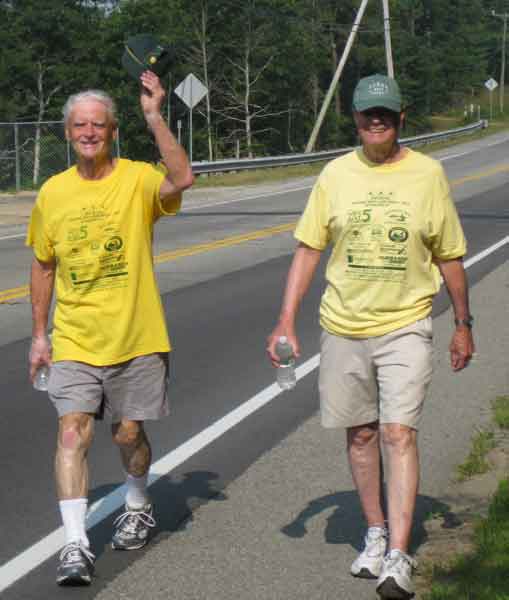 The 21st Annual Bob Murray Housing With Love Walk ended Sunday July 21 with a party at
Liam Maguire’s Irish Pub in Falmouth as walkers celebrated another year of fundraising and fellowship.

Bob Murray, 73, started the walk 21 years ago when he worked at Housing Assistance Corporation. His health prevented him from walking this year, but he was represented at the party by his wife Judy and his daughter Carol, as people gave updates and sent prayers and accolades. “Bob Murray is an inspiration to us all,” Deanna Bussiere, HAC’s Event Resource and Development Coordinator, said. “All the people he has helped over the years is amazing.”

The Housing With Love Walk course is designed to be tough, scheduled as it is on the hottest time of the year, said HAC’s Margaret Benaka, and this year did not disappoint. Margaret, who, with Deanna, drove the support van for the entire seven-day walk, said the biggest challenge this year was the heat. The temperature was in the 90s on six days of the seven day walk and may have made it up into the low 100s in the heat of the day, as walkers journeyed the mostly unshaded highways of the Cape.

In honor of Bob Murray, Cape Cod Five Cents Savings Bank sent teams of people for every day of the walk beginning on the first day when Dorothy Savarese, bank president, and David Willard, director of community relations, started off in Provincetown.

Two women, Laurie Sexton of Harwich and Patricia Goggin of West Dennis and Whitehouse Station, New Jersey walked the entire walk. DJ Sullivan, 77, has walked the entire route in past years, set out to do the same this year, but had to stop on Thursday because of the heat and blisters.

The walk is a fundraiser for 12 Cape Cod housing agencies. One anonymous donor stopped by and gave $50 to one of the walkers. Housing Assistance Corporation raised more than $27,500 through the walk with money still coming in. The agency’s goal is $30,000.

Pastor Christian Holleck of St. Peter’s Lutheran Church of Harwich, in a sermon about the walk, said, “It wasn’t about the number of miles I did, but connecting with people, learning more about some of the efforts to work for affordable housing, being inspired by people who care.” He said what the walk is really all about is, “helping people get on their feet, helping them find stability, a home, work, health, dignity. . . .”