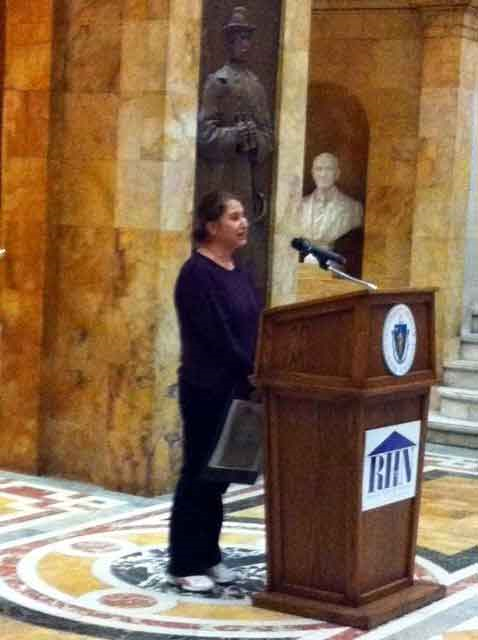 This meeting provides an opportunity for the nine member agencies of Regional Housing Network to meet with individual legislators and aides. The goal of this meeting is to promote the programs and services offered through the various agencies assisting residents to find and stabilize their housing situation throughout the state of Massachusetts, and to secure the continued voting support of our legislators.

In 2002, after escaping from domestic abuse with her then two-year-old son, Benjamin, Marieh found herself homeless in the city of Boston.

“The HCEC person, Kathy Facchini, worked quickly to get me and my son into transitional housing at New Hope Shelter for Women in Attleboro,” Marieh said, explaining how she eventually used the resources around her to get the help she needed.

While in shelter Marieh attended Blaine School for Hair and became a hairdresser by day. By night she was filling out housing applications, “at least 10-20 every single day.” South Shore Housing’s Consumer Education staff walked her through the daunting process.

By 2004, thanks to South Shore Housing, Marieh and her son received a housing unit subsidy in Bourne. “We were literally dropped off on the front steps of a condo with all that we owned, which filled two small suitcases. We both cried out of relief as well as fear. South Shore had connected me to Referral to Resources for clothing, child care and food,” Marieh said.

Marieh and her son lived in this Bourne condo for about 8 years. During this time she was able to go back to school and she became a nurse. She continued to maintain a very close relationship with her South Shore HCEC “family.” “Those eight years took a real toll on my Benjamin. The trauma of what we both had been through with his dad, living in shelter and then living in what most people would call the ‘projects’ of Bourne had stolen his childhood. His self-esteem was low, his grades were horrible and he was physically not growing,” Marieh explains.

By 2011 Marieh graduated from the nursing program and had dreams of owning her own home. South Shore referred her to Housing Assistance Corporation’s HCEC contact, which led her to the First Time Homebuyers Program.

“I then worked with HAC’s real estate office, Cape Community Real Estate, and in 2012, purchased a beautiful new home in Sandwich. I’m now an official Cape Codder. My Benjamin has come out of his darkness and sorrow. He’s gone from a D student to an A student. He’s physically growing. I see the changes every day since the first day of homeownership,” describes Marieh.

Marieh also describes, “I would not have been able to get out of a bad cycle without the constant connection to both HCEC teams. Not only did they keep me moving through a horrible situation, but they motivated me to move up and out.”

To learn about HAC’s Housing Consumer Education Center, please visit us online at www.HAConCapeCod.org or call 508-771-5400.