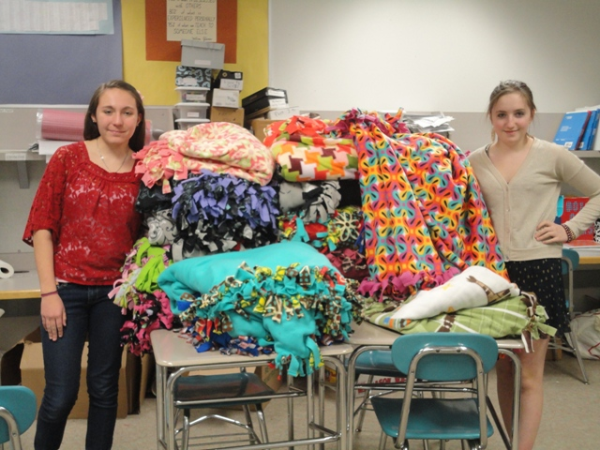 Residents of the NOAH Shelter will gain a warm touch of home next winter, thanks to members of the Key Club at Mashpee High School. The students raised money to buy materials and then made 60 blankets that they donated to Cape Cod’s only emergency shelter for homeless individuals.

Cheryl Belanger, the Key Club advisor at Mashpee High School, says this was the first time the group had written a grant proposal. In addition to winning a $500 grant from the International Key Club, the students raised money by having a bake sale during intermissions of school performances of “The Pirates of Penzance” and sold raffle tickets for a $150 Roche Bros. gift certificate and a beautiful handmade quilt that Jan Bridge made and donated to the Key Club. The students publicized the project by speaking at a school committee meeting shown on cable TV.

The students decided to volunteer for the NOAH Shelter after HAC staff members Rick Brigham and Deanna Bussiere spoke to the group last fall. While visiting the Floating Hospital for Children at the Tufts Medical Center in Boston, the teens saw blankets that other Key Clubs had donated to the hospital and decided to make blankets for NOAH clients.

Using $1,000 worth of fleece and other materials purchased during half-off sales at Joanne’s Fabric, the students made the blankets during Key Club meetings after school.

“There was a time near the end that I was concerned about whether the students would finish the blankets on time,” said Belanger. “But my Key Clubbers rose to the occasion. Each blanket started off taking two hours to complete but by the end, they had it down to a science and with two persons working together on a blanket they could complete it in under an hour. They managed to make a blanket between the opening of the play and intermission, and between parts of the jazz concert and intermission when they sold baked goods. It was surprising how many ways they found to squeeze in a blanket, sometimes starting one after school and finishing it before school the next day.”

Among the students most involved in the project were project chairman Miranda Martone, Ashley Welch and Lashelle Mathias.

The Key Club, which teaches leadership through service to others, is the oldest and largest service program for high school students.