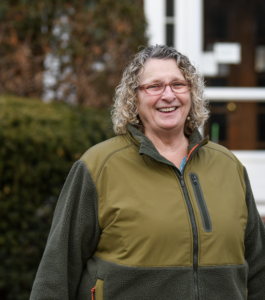 On the first night that Carriage House opened as a family shelter in August of 1989, Marty Wass was the only staff on duty. “It was myself and one other resident,” she recalled.

Since that time, she has remained a constant, quiet presence at the North Falmouth shelter, working four 10-hour shifts, from 10 at night to 8 in the morning, each week. “I am the least known person who has ever worked anywhere for over 30 years,” Wass laughed of her relative anonymity.

At the end of November, Wass was one of 10 employees celebrating milestone anniversaries at Housing Assistance who were recognized by senior management for their dedication to the agency. With more than 30 years at Carriage House, Wass has worked here the longest, but in January, she said farewell to her career at Housing Assistance as she welcomes the next phase of her life – retirement.

She and her husband Ken moved to Falmouth in 1977, four years after they were married. A little more than a decade later, she took the job at Carriage House because it gave her the flexibility to raise their two children, Valarie and Amanda.

During her time here, Wass has enjoyed getting to know clients “when they’re not having to search for housing and their kids are in bed. It’s a little more relaxed,” she said.

She has also enjoyed working for an agency that makes a meaningful difference in people’s lives, especially our most vulnerable clients being served in shelter. “Some people just need a foothold and a place to feel safe and relaxed until they can get on their feet,” she said. “Carriage House is such a nice place. There’s not a lot of places like it. And it’s always good to think you’ve made a little it of a change in somebody’s life.”