When you meet Mary*, you’re struck by how cheerful, friendly, and outgoing she is. Her welcoming demeanor belies not only her age – she’ll turn 90 in June – but what she has been through the past year.

From last June through the beginning of this year, she slept in her car. 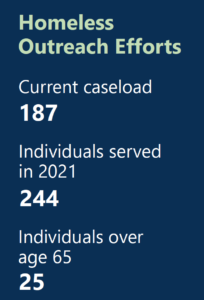 While Housing Assistance’s Homeless Outreach team works with individuals of all backgrounds, seeing someone Mary’s age who was without a home was troubling. “We were told she was living behind a supermarket in her car,” said Outreach Specialist Patty Alonso. “It bothered me for sure.”

Talk to Mary and she downplays her situation. She made the best of a horrible situation.

In many respects, her routine last summer seems quintessentially Cape Cod. She’d wake up at 5 a.m. with the sunrise and head to Cumberland Farms for her morning coffee. Then, she’d make the short drive to Hyannis Harbor where she delighted in feeding the birds and watching the boats pass by.

Despite these pleasant memories, Mary faced the harsh reality of being homeless during the later years of her life. Sadly, it’s becoming more common on the Cape. Currently, Housing Assistance is working with 25 homeless individuals who are over the age of 65.

It’s never easy being homeless. For Mary, it meant relying on the generosity of complete strangers, some of whom gave her blankets to keep warm or money for a nice meal. Basic hygiene was difficult. “Someone told us about Duffy Health Center offering showers. I did it once, but couldn’t do it again,” she said. Sometimes she had enough money for a motel giving her the luxury of a warm shower, a basic necessity that many of us tend to overlook.

This is not how anyone should live, let alone an 89-year-old mother of four who once owned a repertory theater as well as a hotel and a thrift shop with her late husband who died in 2006. Fifteen years later, she became homeless after her Mid-Cape home was foreclosed on. “I loved that house,” she said, before admitting that, “I lost my life. I never imagined this is where I would be at 89.”

At her lowest, Housing Assistance was able to move her into our Angel House shelter in Hyannis. Today, it’s the little things that mean the most to her. “We have a stove, a microwave. When I saw this place, I fell in love with the kitchen and my bed is very comfortable,” she said. “This place means everything to me because it is a home. To me it was the world and it still is.”

Working with the homeless isn’t easy, especially when there’s nowhere to house them. “That makes a tough day so much harder,” Alonso said. “But I love this work. Somebody like Mary keeps me going. You’ve got to love what you’re doing and the people you’re helping.”

*Client’s name has been changed to protect her identity.